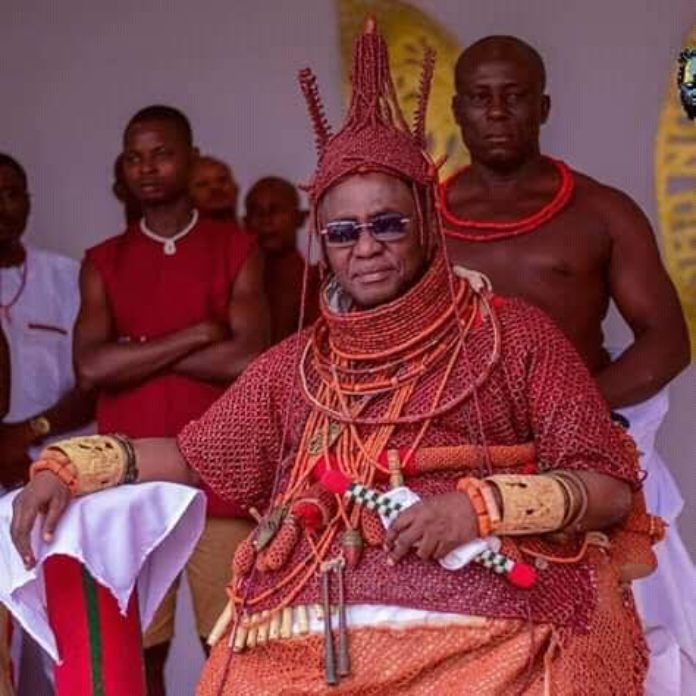 His Royal Majesty, Omo N’ Oba N’ Edo, Uku Akpolopolo, Ewuare II, has debunked authorising anyone to insult the Federal government or other respected Nigerians on his behalf.

The Oba was reacting to a trending video on social media by one Eranornigho Edegbe claiming to have the backing of the monarch when he vented insults on President Muhammadu Buhari and other respected members of the society.

In a statement, the Secretary Benin Traditional Council, Mr. Frank Irabo, stated that Comrade Adams Oshiomhole, had always respected not just the traditional institutions in Edo State but also the Palace of the Oba of Benin.

The Oba also described Captain Hosa Okunbo as an illustrious son of the Palace of the Oba of Benin.

It reads: “The attention of the Palace of the Oba of Benin has been drawn to a recent video trending on social media anchored by one Eranornigho Edegbe stating that he has the authority of His Royal Majesty. Omo N’ Oba N ‘Edo, Uku Akpolokpolo, Oba Ewuare II, Oba of Benin, to hurl invectives and insults at His Excellency, the Presidenl of the Federal Republic of Nigeria, President Muhammadu Buhari, GCFR. and few other respected members of the society.

“We condemn in the strongest terms the malicious attacks on the integrity of His Excellency. the President and Commander-in-chief of the Armed Forces of the Federal Republic of Nigeria, Muhammadu Buhari, GCFR, and all other persons vmorn the video seek to malign.

“We wish to state unequivocally that our love for Mr. President is unparalleled as the relationship shared date back to the days of His Royal Majesty, Oba Erediauwa (of blessed memory), the immediate past Oba of Benin.

“In our avowed stance of non-partisanship, we are in constant prayers that His Excellency’s desires will fully manifest in Edo State for the benefit of the Benin Royal Family Edo people and, the nation as a whole. Thus, our prayers and support for Mr. President is enormous.

“We also wish to state that Comrade Adams Oshiomhole has always respected not just the traditional Institutions in Edo State, but also the Palace of the Oba of Benin. His affectlOll lor oor father who adopted the Comrade as a soo is well known.

“This relationship was also reinforced during his tooure as Governor of Edo State. We were happy to oonvene a send forth for him upon the expiration of his lwo-terms, where HIS ROYAL MAJESTY used the Ada of the ancestors to pray for his protection, a thing quite rare in Benin custom; we are glad that the prayers said on him continue to be efficacious in an his endeavours.

“Captain Hosa Okunbol is an illustrious son of the Palace of the Oba of Benin, who at all times has worked in support or the Palace as a son of the Oba or Benin, thus, there can be nothing but goodwill and positive prayers for this distinguished son of Benin Kingdom.

“These utterances and behaviour or Eranornigho and his cohorts show that they are not happy and comfortable with the relationship between the Palace of the Oba of Benin and the Presidency.

“Furthermore, shows that some disgruntled elements like Eranomigho have deep animosity against Comrade Adams Oshiomhole and Captain Hosa Okunbo.

“The video under reference, and all such made in similar vein should be seen for what they really are, as they seek to propagate ‘fake news’, misinformation, disaffection, and misrepresentation for their own selfish and mischievous intentions.

READ ALSO: My position on Edo politics, by Oba of Benin

“The recent fake news is akin to an audio one that claimed HIS ROYAL MAJESTY has directed all Bini people not to sweep their homes for three days in order to avoid the coronavirus pandemic which they knew very well was contrary to keeping everywhere disinfected as well as hand washing, using hand sanitizers and practicing social distancing protocols, all part or the NCDC PANDEMIC PREVENTION MEASURES. We also had to rebuild that immediately.

“The antecedents of social media rats and their roguish antics and activities are a global malaise, and should not be taken seriously by rational, reasonable and responsible members of society as their action is driven by their quest to satisfy their hunger and their desperation to scrounge for a means of livelihood.

“We wish to reassure His Excellency, the President or the Federal Republic of Nigeria, and aa mentioned in the Video that they enjoy the confidence and goodwill or His Royal Majesty, Omo N’Oba N’Edo Uku Akpolokpolo, Oba Ewuare II, Oba of Benin.

“We use this medium to sound a note of caution to members of the public to totally disregard and discountenance the statements made in the said video and to further warn that this attempt and similar attempts to bring the Palace of the Oba of Benin and the revered institution of the Benin monarchy into disrepute shall be met stiffly within the parameters of the laws of the Federal Republic of Nigeria and the traditional processes or the Benin Kingdom.

“Eranomigho and his cohorts are hereby reminded that there is an ancestral curse on anyone who attempts to tarnish the image of the Oba of Benin and the ancient Throne of Benin Kingdom. The Benin Traditional Council hereby demands an unreserved apology from Eranomigho in other to avert the consequences”.