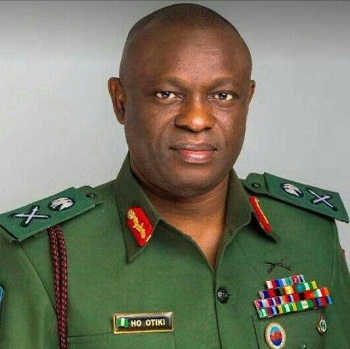 For the former General Officer Commanding (GOC) 8 Division, Sokoto, Major-General Hakeem Otiki, what promised to be a glorious 35-year career in the Nigerian Army ended on a rather sad note.

General Otiki has been found guilty of theft and other charges by the General Court Martial (GCM) set up by the Nigerian Army to try him.

The GCM, headed by Lt-Gen. Lamidi Adeosun, the Chief of Policy and Plans of the Nigerian Army, at its sitting at the army headquarters garrison in Abuja, found Gen. Otiki guilty of disobedience to service orders, missing funds and theft of public property.

It ordered that all monies recovered from him by the Special Investigation Bureau, including $6,600, be returned to the coffers of the Nigerian Army.

The same applies to another N150million which the former GOC allegedly could not account for.

Gen. Otiki was consequently demoted to Brigadier-General and is to lose two years seniority. Above al³, the GCM ordered his dismissal with “disgrace and dishonour.” The sentences are however subject to approval by the Army Council.

Gen. Otiki was charged under the Armed Forces Act (AFA) after soldiers in his detail reportedly stole about N400 million. His trial started in September, 2019, following the disappearance of the soldiers he sent to transport the cash to Kaduna by road, from where a military aircraft would then fly it to Abuja.

But the soldiers absconded with the money during a stop in Kaduna and subsequently deserted the army. Gen. Otiki was then placed under house arrest until his trial by the court-martial began about nine months ago.

But it would appear the former GOC was the architect of his own misfortune. The court martial verdict was only the most recent of his culpability in infractions in the last six months alone.

Earlier in January, Gen. Otiki was ordered by the Abuja Division of the Federal High Court to forfeit $376,120 to the Federal Government.

He was also said to be having major interests in some business concerns, against public service rules and regulations. He denied this though.

The Nigerian Army has done well to punish not just one of its own, but a senior member of the army for that matter, for corruption and other infractions.

The army has thus shown that no one is above the law. Gen. Otiki’s exit with ‘disgrace and dishonour’ from the army after 35 years service would serve as a deterrent to other officers who might be inclined to toe his path.

Corruption in the military has caused the nation a lot, not only in terms of social infrastructure but also in terms of security.

The country has been battling terrorism occasioned by Boko Haram insurgents for more than a decade. Yet, there has not been much progress in the battle partly because some unscrupulous military officers have been stealing or mismanaging huge sums of money meant to procure weapons or to boost the morale of the troops.

We hope that the Army Council would look at the GCM recommendations thoroughly and dispassionately, and act appropriately.

However, much as we commend the army for seeing the Gen. Otiki matter to its logical conclusion by serving him his just deserts, we would like the army authorities to treat the case of the soldiers involved in the Wadume saga with similar interest and dispatch.

It is even more grievous than Gen. Otiki’s case, considering that lives were unjustifiably lost in the latter incident. The nation lost three crack detectives that the police authorities said were some of the best in the force.

Considering the public interest generated by the incident, Nigerians were eager to see the suspects arraigned – soldiers, policemen, civilians and all – but were disappointed when the soldiers were not in court along with the other suspects because, according to the Attorney-General of the Federation, Abubakar Malami, the army authorities were not ready to release the soldiers for trial.

This is not good enough. Gen. Otiki was convicted in court in January even when his court-martial process was on. We do not see the reason why the soldiers involved in the Wadume saga cannot be similarly treated.

This is the only way to avoid insinuations of cover up. It is taking too long, if really the army is doing something about the soldier-suspects involved in the despicable Wadume incident.

That the army appears to be stalling, or silent on the issue despite a court order that the soldiers be released for trial, makes the matter worse.