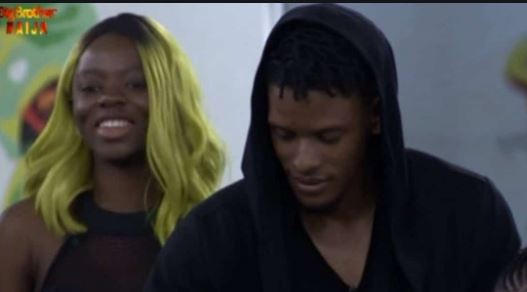 All is not well with the relationship between two lovebirds, Diane and Elozonam.

The re-union show on Tuesday night, which was Day 18, saw both of them venting anger at each other, with Diane insisting that their relationship did not work, and so they should move on.

Diane explained that there was a time Elozonam’s fans insulted her, and he was aware, and he did nothing about it. She said there was a whatsapp group created where she was insulted. She further countered Elozonam’s claims the she was putting him as a second option, while in the house, and after the house.

“I did not put you as an option.” Diane said. “I explained everything to you my relationship with Mauly, There was a time your fans insulted me, and you did nothing.

Eloznam explained how Diane flirted with the guy and left him alone at the Big Brother Naija final party, and he was angry.

“I did not have a situation ship with somebody. I have a bestie. I told you about it.”

There were discussions on whether Jackye liked Mike, but she talked a lot about her boyfriend, whom she said she loves because he is showing that he wants to change from his bad behaviours.

Frodd, speaking on the issue said Jackye liked Mike and was always around him.

Replaying, Jackie said “I value my boyfriend, he was very important in my life, I wished another person was vocal about their relationship too to me

I want women out there to know that relationships is not all a bed of roses.