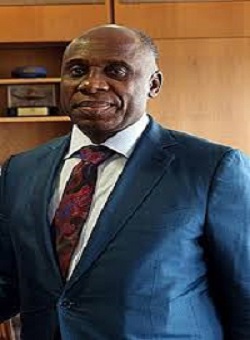 A chieftain of the All Progressives Congress (APC) in Rivers State, Eric Nwibani, has urged Senator Magnus Abe to reconcile his political differences with the Transport Minister, Rotimi Amaechi.

Nwibani in an open letter to Abe insisted that it was time Abe discontinued his fight with Amaechi and return to his friend to forge a common front for Rivers APC.

He recalled that Amaechi was involved in every aspect of Abe’s political growth including mobilizing and supporting him to represent the Rivers East Senatorial District at the National Assembly.

He, however, lamented that Abe’s fight with his friend caused the Rivers APC opportunities to participate in the last general elections.

Addressing Abe, he said: “It is common knowledge that you, until three years ago enjoyed the best of friendship and strong collaboration with the man, Rt. Hon. Chibuike Rotimi Amaechi whose highest political investment, you said you are.

“As for the rest of your journey through Dr. Odili’s Administration as Commissioner for Information, Amaechi’s Administration as Secretary to Government to your Eight years in the Senate, it has been God using Rt. Hon. Chibuike Rotimi Amaechi to painstakingly push you up there.

“I’m aware of the efforts of very prominent Ogoni leaders to stop your nomination for the Rivers South East Senatorial District in 2011; preferring erudite Professor Ben Nanem. On the strength of your friendship with this same person, you emerged amidst unprecedented rejection by Ogoni people.

“Most, if not all of the prominent Ogoni leaders vowed to withdraw their support for Amaechi if he insisted on Magnus Abe. They made good their threats afterwards. He lost their friendship. Imagine the sacrifice.

“There is no gain saying that you had a good outing in the Senate and worked with your Principal, Chibuike Amaechi to build what we have today as the APC in Rivers State. Your intelligence and sagacity can’t be taken for granted but I doubt if many people, who have dutifully followed your activities recently can justify your fight against Amaechi”.

Nwibani added: “Distinguished Senator, thousands of Party faithfuls in their closed doors cry to God on a daily basis for justice against those who have kept them in their current situation.

“Many Rivers people and residents alike (most of whom are not politicians) attribute the sufferings of our people today to the internal crisis of the APC which prevented them from having a credible alternative in the 2019 elections. You may not know but it is a fact. I’m not sure, it is something to be proud of”.

“I sincerely think it is time to stop the fight, return to your friend and leader and make peace with nature. No time is too late. Think about it and please accept the assurances of my highest regards”.