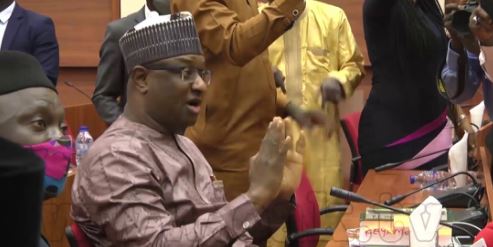 THE Special Public Works Programme (SWP) of the Federal Government designed to hire 774,000 youths has sparked a huge row between a Federal Executive Council (FEC) member and federal lawmakers.

The Federal Government has set aside N52 million to pay the 1,000 youths from each of the 774 local government areas at 20,000 per member for three months.

Those engaged are expected to do public works for the last quarter of the year.

At issue is the formation of the selection committee that will recruit the beneficiaries.

The meeting ran into troubled waters when Director-General of the National Directorate of Employment (NDE), Nasir Ladan Argungu, was asked to explain the composition of the Keyamo-led 20 member committee handling the selection of beneficiaries.

Argungu said he could only account for eight statutory members of the committee, adding only the minister of state could speak on the remaining 12 members.

Some members of the joint committee complained that the representatives of their states in the selection committee were unknown to them.

They requested Keyamo for insight into how the 12 members were picked; the roles  of  representatives of the Academic Staff Union of Universities (ASUU) in the recruitment and why  a  programme which budget is under the NDE is being hijacked by him.

The joint committee members accused Keyamo and Argungu of not being on the same page on the programme.

Before the minister could respond, co-chairman of the joint committee, Senator Godiya Akwashiki, said the briefing would go into a closed door session.

However, Keyamo argued that since the questions were asked and allegations made in the full glare of the media, a closed session   was not necessary. He said   his response should also be captured by the media.

His insistence angered the lawmakers who said he (Keyamo) could not direct how a session by a national assembly committee should be conducted.

They asked Keyamo to apologise for attempting to upturn the committee’s resolution  on how the sitting should be conducted.

Keyamo, who declined because he had “done nothing wrong”, threatened to walk out on the committee.

The disagreement and insistence by the minister led to flared tempers, banging on tables and eventual storming out of the session by Keyamo.

The uproar brought the session to an abrupt end.

Speaking to reporters, Keyamo said: “What they have not allowed me to say inside, I will say it outside.

“The background to this is that a couple of days ago,  they started mounting pressure on me that I must bring a list of those to select 1,000 persons per local government across the country for them to direct me as to what to do from state to state.

“The chairmen insisted I must come to them privately to be handed an instruction on what to do and how this programme would be done.

“I told them that it would amount to  sharing the powers of the President.  I can only be answerable for what I have done by the provisions of the Constitution,  but you cannot direct me.  I can’t  explain in an executive session matters like this because it involves the 774 Local Governments Areas across the country.

“You cannot accuse me of a lopsided issue in the open  and then  want to go into a closed session.

”They can investigate the programme I can be coming here every day to explain but they cannot control it.”

The minister later issued a statement  in which he said: “I will  not surrender the programme to their control since their power under the constitution does not extend to that.”

Keyamo, who said he learnt that the joint committee later suspended the work of the selection committee nationwide, directed the members to go ahead with the assignment as “only Mr. President can stop them.”

He argued that the action of the lawmakers was  ”tantamount to challenging the powers of Mr. President.”

Keyamo, a Senior Advocate of Nigeria (SAN), added: “I regret to say that their powers under section 88 of the 1999 Constitution is only limited to investigations, not to give any directive to the Executive.”

“I will not come into government and be intimidated to abandon my  principles. I will rather leave this assignment, if Mr. President so directs than compromise the jobs meant for ordinary Nigerians who have no godfathers or who are not affiliated to any political party.”

Senator Akwashiki, who presided over the joint committee, told reporters after the botched session that Keyamo insulted them.

Akwashiki said: “We asked the minister of state  to explain to us how far they have gone because we read on the pages of newspapers   that a 20-man selection committee from each state was inaugurated.  .

“He said it was a tripartite committee set up by Mr President that comprised eight ministries but we disagreed with him on that because we are lawmakers and we try to work always within the ambit of the law for the implementation of whatever we have for the Nigerian people.

“We said this money (N52billion) has been  approved under the NDE. It is even in the budget. So for him to say it is eight ministries that are involved in this we disagree with him.

“If we did not get it right with the selection committee, I want to tell you that this programme is going to be a failure.

”How the minister arrived at the remaining 12 people is best known to him. The Director General who happens to be the accounting officer of the agency did not know how he came about the selection of the 12 people.

“We cannot sit down and watch him. But because he claims he is a lawyer, he is trying to bring confusion.

“At the end of the day, he tried to insult the lawmakers. He was trying to tell us the procedures of our sitting.”