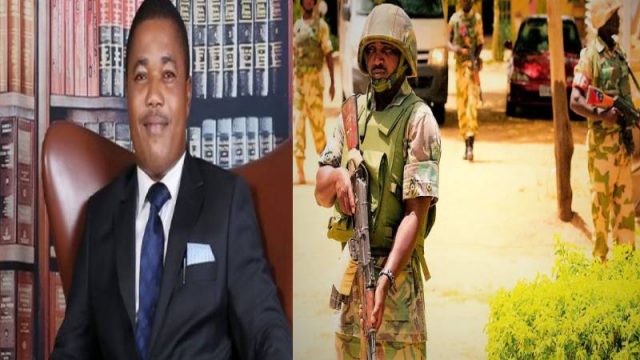 An attorney for the Indigenous People of Biafra (IPOB), Mr. Ifeanyi Ejiofor has called for the intervention of the British Government over the assassination attempt on his life and invasion of his ancestral home at Oraifite in the Ekwusigo Local Government Area of Anambra State by Nigerian security agents.

In a letter dated June 10, 2021, addressed to the High Commissioner, British High Commission, and obtained by Newzandar News, the lawyer asked the British Government to prevail on the Nigerian Government to set up an independent investigative panel to probe the killing of his personal assistant, Samuel Okoro and an assassination attempt on his life on June 6, 2021.

He questioned how he was singled out for assassination despite the peace initiatives and solutions he had offered for lasting peace to reign in the Southeastern region of the country.

Ejiofor narrated how the team of agents killed his personal assistant, Samuel Okoro, put his body in the boot of his (Ejiofor’s) Toyota Camry car, and went away with the car and Okoro’s body.

He said the security operatives came with about 15 vans and buses.

The letter read in part, “It is even more worrisome since till date, there has been no statement from any of the said security agencies, taking responsibility for the murderous invasion and/or operation, and/or given any explanations for same.

“It is therefore clear from the foregoing, that our client’s life is no longer safe, as there is an obvious state-sponsored conspiracy to eliminate our client at all cost and by any means.

“We call on the British Government to prevail on the Federal Government of Nigeria to set up an independent investigative panel to investigate the recent incident that occurred at our client’s ancestral home in Oraifite, Ekwusigo Local Government Area of Anambra State, on the 6th day of June 2021, and the first invasion that occurred on the 2nd day of December 2019.

“We also call on the British Government, to prevail on the Federal Government of Nigeria and her security agents to desist from further attempts on our client’s life.

“We further call on the British Government to intervene in the circumstance and afford our client all necessary protection available.

“We finally crave the indulgence of the British Government for a proactive oversight and intervention in the light of this obvious travesty of justice and to prevail on the Nigerian Government to desist from a further attempt on our client’s life.”

He queried the rationale and motive of those behind the attack, saying Sheikh Ahmad Gumi who was advocating for bandits was being protected by security agents of the Nigerian state.