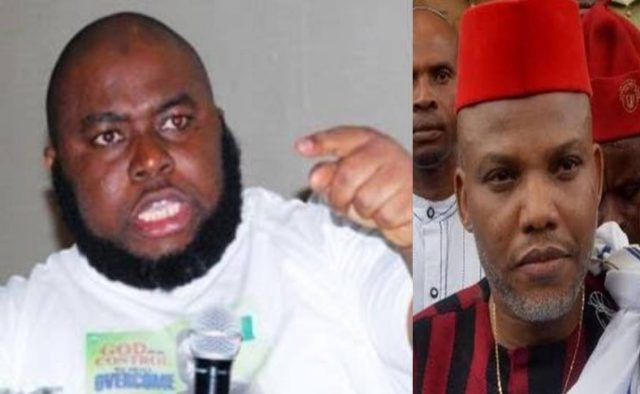 Former Niger Delta militant, Asari Dokubo has alleged that Mazi Nnamdi Kanu, leader of the Indigenous People of Biafra, IPOB is a criminal who hides behind the Biafra struggle to extort money from Igbos.

Dokubo who recently formed the Biafra Customary Government (BCG) and declared himself as its commander, accused the IPOB leader of turning the struggle to personal source of income.

BREAKING: Unknown Gunmen Did Not Kill Any Of Our Member — Army Says As They Deny Losing 7 Soldiers in Abia

In a recent video he released on social media obtained by newsmen, the ex-militant narrated how he treated IPOB members who were injured during violence in the Southeast.

He said, “Now they said they brought money to Cotonou to give to me, 30 million Naira.

“We are waiting for them to bring the evidence. They came to Cotonou to meet me, I hosted them, I fed them, they didn’t bring a dime.

“I had paid several medical bills for IPOB members in different places they have been injured.

Many Igbos have been brainwashed with unachievable Biafra — Chris Ngige

“But Nnamdi Kanu thinks that because he is a thieve and because stealing, fraudulent, drug-pushing, human parts trafficking, is so wide with Igbo people, he can control everybody.

“You want to form a nation with Igbos, it definitely be a criminal country.

“I have never looked for Nnamdi Kanu. He was the one looking for my contact everywhere. Some of my followers who came to me to join IPOB, I allowed them to do so.

“He is always doing the callings. I have never picked up my phone to call him before. Because he is the one who knows when he is free in the prison to call.

‘He called and begged there should be cooperation, which I agreed. Nnamdi Kanu is a supreme coward.

“Biafra is your business now, you have no other avenue for gainful income. It is a pity how Igbo people have fallen for this evil, but your time is up.

“I am out for you. And I will get you. I just asked that our people be allowed to vote and you sent your dogs. I’ve broken their teeth.”