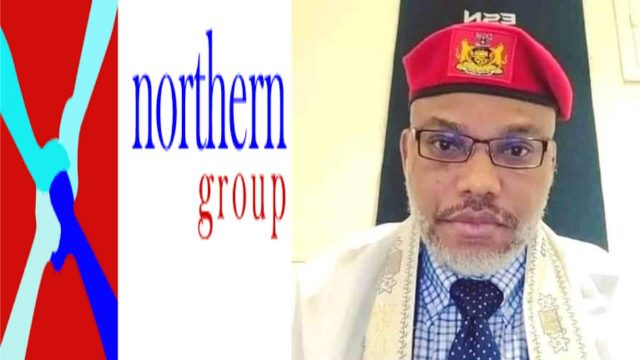 A Northern group known as the Northern Consensus Movement, NCM, has declared the Leader of the Indigenous People of Biafra, IPOB, Nnamdi Kanu, who now resides outside Nigeria, wanted, Page 36 learnt.

Speaking during a Press Conference on Thursday, the President of the group, Dr. Auwal Abdullahi, also announced N100 million as compensation for anyone that can produce the IPOB Leader.

He said: “We are declaring Nnamdi Kanu, the Leader of IPOB and ESN, wanted, for the killings, destructions of properties of Northerners residing and undertaking their lawful businesses in the South-Eastern part of Nigeria.

“We of the Northern consensus movement, NCM, an amalgamation of more than 75 organisations of Northern extraction have taken it upon ourselves as active and responsible citizens of this country to state in clear, unequivocal terms and without any form of ambiguity that;Nigeria is a democratic nation under a democratically elected Government.”

It doesn’t matter how many they kill, Biafra must come – Nnamdi Kanu

“We call on all countries of the world to respect our sovereignty as a nation. Nnamdi Kanu, the leader of IPOB, is the man and brain behind the killings and destruction of properties belonging to innocent northerners residing in South-Eastern Nigeria carrying out their legitimate business using his proscribed terrorist organization, IPOB/ESN.

“Northern Consensus Movement in collaboration with these organisations are hereby declaring Nnamdi Kanu, the Spiritual Leader of IPOB and ESN wanted for crimes against humanity and for instigating the killings of innocent Northerners residing in South-Eastern Nigeria.

“We call on the US Government, German Government as champions of democracy, rule of law and freedom of speech and expression to humbly and kindly respect Nigerian sovereignty and facilitate the repatriation of Nnamdi Kanu back to Nigeria so that he can face his terrorism and genocide charges against innocent citizens of Nigeria.

“Northern Consensus Movement with these organisations has placed a bounty of N100 million as an offer to anyone who can produce Nnamdi Kanu alive, hale and hearty to us for onward delivery to Security Agencies for continuous prosecution.”