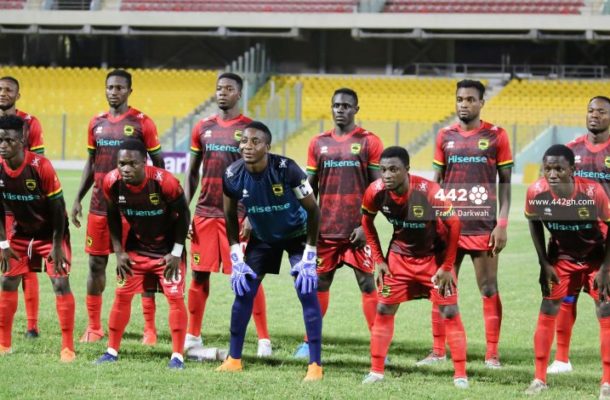 Ibrahim Moro scored the winning goal for Asante Kotoko when they met Dreams FC at the theatre of Dreams, Dawu in December in a match day six encounter.

The left back is by far one of the most exciting players in the on-going League, churning out brilliant displays on weekly basis –leading to his call up into the senior national team, the Black Stars.

Asante Kotoko were knocked off the top spot two weeks ago following a 2-1 loss to Medeama SC at the Len Clay stadium in Obuasi – their second home loss of the season and a win against Dreams FC will boost their morale and put them in good stead for the title challenge.

The Porcupine Warriors lie 2nd in the table with 38 points – one point behind leaders Medeama SC who sit at the top of the Premier League table with 39 points.

They began the second half of the season on a strong – after a 2-0 win against Berekum Chelsea – but Great Olympics pulled the breaks on them – after holding them to a goalless draw in Accra. Asante Kotoko lost 2-1 to Medeama SC on match day 21 but recovered to beat Legon Cities 1-0 on match day 22.

The Warriors aim for a win on Saturday to move back to the top of the table for at least 24 hours before Medeama SC play Liberty Professionals on Sunday.

Dreams FC made headlines on Sunday after their heroics against Accra Hearts of Oak in Dawu. The Still Believe lads scored two brilliant second half goals to beat the Phobians 2-0 to move 5th in the table – 4 points adrift Asante Kotoko.

They certainly look good going into this tie with their shoulders held high having recorded such a famous victory against one of the best teams in the League. Dreams FC started the second round with a home draw against Inter Allies but defeats to Medeama SC and Great Olympics seem to have dashed their title charge until their recent upsurge. In the last three matches – they have drawn two and won one and look pretty good going into Saturday’s crucial encounter against Asante Kotoko.

They have not found a like for like replacement for the departed Joseph Esso – but Ibrahim Issah, Fahadu Suleman, Agyenim Boateng and Sylvester Simba have fitted in quite well since Esso was transferred to MC Alger of Algeria.

The Ghanaian International scored 11 goals before leaving the shores of Ghana.

The game is scheduled for 3pm kick off at the Len Clay stadium on Saturday and will be broadcasted live on StarTimes Adepa channel 247.