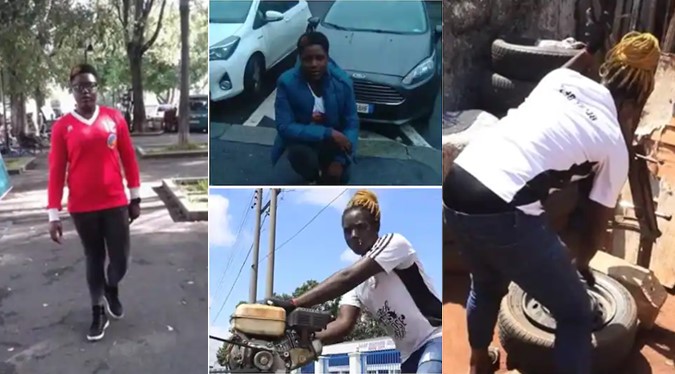 A young Nigerian lady who returned to Nigeria from Europe now works as a vulcanizer in Edo state, south-south part of the country.

Becky Osarume Osagie had gotten to Italy from Libya in 2015 but after series of challenges, she returned to Nigeria in 2017.

In an interview with BBC News Pidgin, she revealed that an agent had helped her with the trip that cost about N400,000 out of his own pocket.

The lady was consequently made to agree that upon arriving in Italy, she would work to pay back to the agent £35,000 (N17 million).

Becky said that she endured the Libya road challenges and stayed in prison for two weeks with the hope of a better life in Italy but took she eventually decided to return to Nigeria as the only work presented to her in Europe was prostitution.

The young lady reported herself to police authorities in Italy which fast-tracked her return to the West African country.

Upon arriving in Nigeria in 2017, she sought an occupation to make ends meet.

Then she took interest in vulcanizing after watching popular Nollywood actress, Mercy Johnson act the role in a movie.

Becky then resolved to get the skill and take it as an occupation. Despite her boyfriend ending their relationship because of the vulcanizing job, the hardworking lady has no regrets about it.