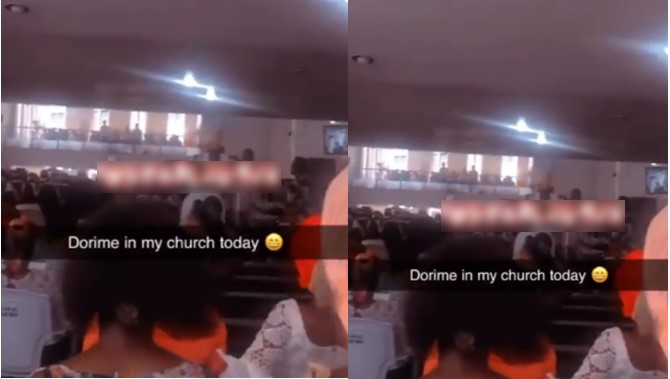 A video making rounds online shows the moment members of a church in Port Harcourt, Rivers state were being serenaded with a now-famous club tune, Dorime.

Dorime is a song which is usually played in Nigerian clubs and at parties whenever a grand entry of some sort is being made.

In the video, the church choir could be heard singing the song as the congregation looked on in silence.

The act has sparked mixed reactions on social media with some saying singing dorime in a church is unacceptable, while others noted that the song was originally composed as a church hymn.

Read some comments below..

ricky1new; He say one for the pastor, one for the ministers , two for the remaining church members

julietdiplomat; This song is for everybody especially those who give donations in church 😂😂😂😂

fiissaayyoo; What can not happen in Nigeria does not exist 😂

opsyswagger; End time is near inside church 😮😮

hc_dolls; Not funny, there are limits to everything 🥺

kuntaakinte_; The composer of dorime actually said the words in the song are actually not of any language. So it is actually meaningless. You can google it if u feel the need to argue