There was drama onboard a flight recently, resulting from a female passenger trying to open the plane’s front door.

She had to be duct-taped to her chair after reportedly attacking flight attendants and attempting to open the door mid-air.

The incident happened on American Airlines Flight 1774 that was traveling from Dallas-Fort Worth, Texas to Charlotte, North Carolina on Tuesday, July 6.

A TikTok user @lol.ariee shared a video of the incident and narrated how commotion started one hour into the two-hour flight when “all flight attendants were running up and down the aisles, frantically kind of like whispering to each other.” 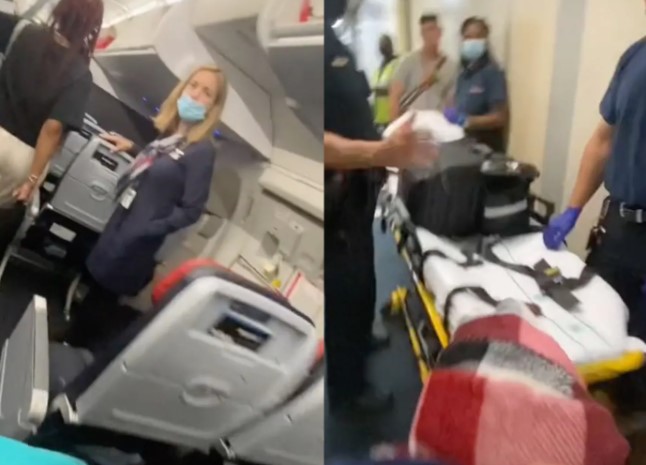 The crew began locking bathrooms, and started grabbing bags from overhead bins, but wouldn’t say what exactly was happening.

The pilot finally spoke over the intercom and asked people to stay in their seats because of “a bad situation in the plane”.

As the plane was landing, a flight attendant who sat near the passengers explained that a woman who was going through an apparent mental breakdown, “had an outburst” and attempted to get off the plane.

The woman reportedly got aggressive, biting, spitting, and attacking flight attendants, so this prompted airline crew to “take her down” and duct tape her mouth.

When the plane landed, the unidentified woman in first class can be seen with duct tape around her body and mouth as she attempts to scream at passengers who are departing the plane.

The video shows a police officer and medical personnel waiting by the plane’s entrance as other passengers walk out upon landing.

American Airlines confirmed to the New York Post that a woman “attempted to open the forward boarding door” during the flight and was restrained “for the safety and security of other customers and our crew.”