Police officers on rampage destroyed vehicles and properties in Aba, the commercial city of Abia State.

This is coming few hours after Gunshots were reportedly heard around Aba Area Command on Thursday morning.

Following the gunshot, traders scamper to safety as shops, including pharmaceutical shops around Hospital road by CPS, Jubilee road by CPS and were totally shut down.

Following the gunshot, traders scamper to safety as shops, including pharmaceutical shops around Hospital road by CPS, Jubilee road by CPS and were totally shut down. 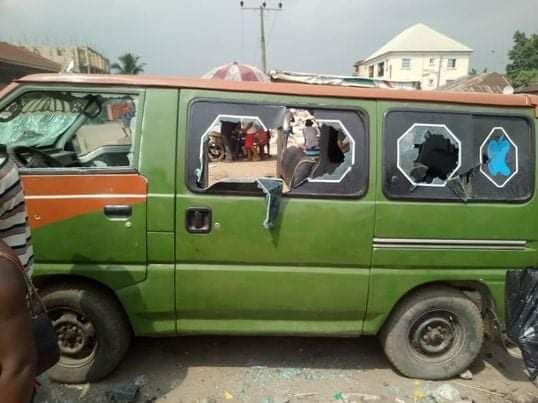 According to eyewitness reports, the rampaging Policemen carried out the act along Azikiwe road and Jubilee road in Aba, without no provocation from the residents.

Mr. Longinus Ibe, a Tricycle operator tells the full stories of how they destroyed his Keke and took it away to their station while searching for men of Eastern Security Network (ESN) and IPOB.

“I was eating at a nearby restaurant when I saw a team of Policemen arrive at the place and started shooting sporadically, everybody ran away to safety and take cover as they threw teargas.

“We thought it was over, until they went and reinforced, they came back started destroying peoples vehicles.

“Mine, (Keke Napep) was destroyed and they took it down to their station.

According to him, the Policemen did this unprovoked as the residents around the area had no knowledge of what could have led to the act.