The activists also threatened to occupy and shut down all branches of Dunamis Church across the country by next Sunday if their colleagues are not released by then. 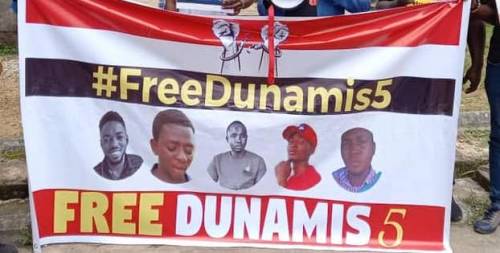 The protesters, who were earlier harassed by a team of armed policemen and church security guards stationed at the auditorium’s gate, decided to hold the protest at the Galadimawa branch of the church.

Speaking on behalf of the group, Mr. Damilare Adenola called on the Senior Pastor of the church, Paul Enenche, asking him to ensure the release of the young Nigerians.

According to him, the activists have not committed any offence known to law.

He said, “Five of our colleagues have been in DSS detention for the past seven days and we went to Dunamis Headquarters today and they attempted to arrest us.

“They used police officers to intimidate us and that is why we have come here and our colleagues are doing this across  Dunamis branches to vent our anger against the church for arresting our Christian brothers who came to church to express themselves.

“As much as I know and you will agree with me that people have the right to protest and express themselves.

“This is the place we can express ourselves and we are sending the message through their branch to the General Overseer, Pastor Paul Enenche to immediately swing into action and ensure that our colleagues are released from detention. If not by next Sunday, we are going to occupy all the branches of Dunamis Church across the country.”

He added that Enenche, the church, and the Department of State Services were working together and orchestrated the arrest of the five activists who worshipped and took holy communion right in the church last Sunday.

Some overzealous policemen and church security guards had arrested two journalists from The Punch and Roots TV who came to cover the protest but were later released.