Some Nigerians, on Tuesday, have rejected attempts to surreptitiously remove electronic transmission of results in the draft of the Electoral Act (Amendment) Bill 2021 by the Senate Committee on Independent National Electoral Commission (INEC).

In a protest on Tuesday, popular activists Aisha Yesufu, Deji Adeyanju, among others kicked against this plan, challenging the Senate President, Ahmad Lawan and Speaker of the House of Representatives, Femi Gbajabiamila to exercise legislative powers in making policies that will favour the masses. 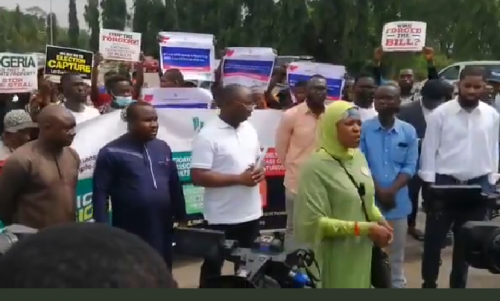 “Lawan and Gbajabiamila, you are the heads of the National Assembly, be heads, stop being tails, the legislative arm of government is an arm on its own, there is separation of powers, there is independence, stop doing ‘boy boy’.

“At the end of the day, this country belongs to all of us, and no Nigerian is more Nigerian than any Nigerian, no matter whether you are the executive, legislature or in the judiciary. We must fight for a greater Nigeria so that 100 years from now, the Nigeria that will be here will remember this moment and say we did well.”

On Sunday, the National Assembly reportedly blocked the proposed electronic transmission of election results in Nigeria.

The lawmakers are set to pass the electoral act amendment bill, but the amendment dashes the hopes of key reforms that would come with the proposed law, according to a copy of the final bill.