A Nigerian and United States citizen, Da Zion Umoh, who was detained for several months by the police in Akwa Ibom State, for criticizing the state governor, Udom Emmanuel, has raised the alarm over the death threats he received in his house.

Umoh noted that he could not sleep again in his house as unknown people allegedly linked to the state government had been threatening to kill him and his family members. 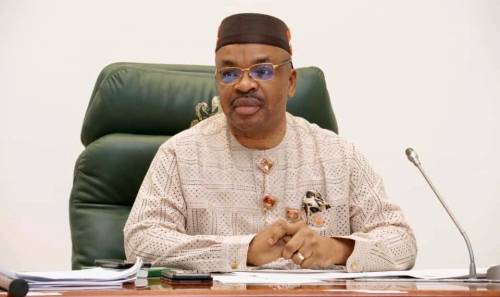 The Akwa Ibom indigene narrated his ordeal in the hands of the police to Newzandar News, saying the operatives tried to extort $50,000 from him to drop the trumped-up charges.

Newzandar News obtained a copy of the notice of death threat on the man’s family.

The notice partly reads, “Da Zion Umoh; this is the last warning to you. If you don’t stop fighting the Akwa Ibom state government, Governor Udom Emmanuel and Deputy Governor Pa Moses Ekpo, we will kill your entire family while you are in prison and your friend, Godswill Akpabio, will not do anything.

“We transferred you from Ikot Ekpene prison to Uyo prison for you to suffer and your friend, Godswill Akpabio, could not help you.”

Umoh, after that, narrated his ordeal for months in the hands of the police.

“I was told that I supported the EndSARS protest by inciting the youths and making a video in Dallas, Texas, back in October 2020. I was held at the police cell from 22 to December 24, 2020, and was released on bail.

“On December 28, 2020, the police called me to come back to the station with a promise that the Deputy Governor who wrote the petition against me wanted to squash the case and allow me to be, so I went to the station again while on bail and was arrested again and taken to court where they obtained a court order to remand me in prison custody.

“After a month and a half, I was about to be given bail but the police came and dropped the “Threat to life/Conspiracy” charges and my bail application was revoked immediately, which kept me in jail for almost two months before I was granted a bail with a new charge of “terrorism” which means that I was held in prison for over a month with two wrong charges of “threat to life and conspiracy.”

“I was released from prison and now facing the trial with the state government, while the Deputy Governor of Akwa Ibom State as the petitioner has not for once appeared at the court.

“The trial was scheduled for the first week of June 2020 and appeared at the court but the trial was now shifted to 27th, 28th and 29th July and we all know that this is just a delay tactic from Akwa Ibom State to keep me here in Nigeria away from my wife and kids.

“I am a US citizen by birth but I am being held hostage in Akwa Ibom State by the Akwa Ibom State Government. They have no right to hold a US passport which is a US government property but they are holding it just because they feel that they are above the law.

” Someone at the US Consulate in Nigeria by the name Kevin reached out to Akwa Ibom State Attorney General when I was in prison with two wrong charges of “Threat to Life and Conspiracy,” and he took time and explained to the US Consulate why I was given those charges and he assured him that those were the right charges although they couldn’t provide or mentioned someone that I conspired with.”

Umoh noted that the state government had refused to explain to the US Consulate and US Government why he was imprisoned for more than a month on two false charges.

“My gold necklace and my gold bracelet were taken from me by the police officers on December 24, 2020, and till today, they say they can’t find those items, and they have refused to tender them to me.

“A threat letter was also pasted on my gate while I was in prison and since then, I have been hiding from one place to another because my house is not safe,” Umoh added.