Hajia Amina Jauro, the wife of the Senator representing Bauchi South District in the National Assembly, Lawal Gumau, has been accused of housing property fraud in the Gwarinpa area of the Federal Capital Territory, Abuja, according to several documents sent to Newzandar News.

Hajia Amina, whose husband was elected on the platform of the All Progressives Congress in 2019, and was a two-term House of Representatives member, allegedly  defrauded many house seekers when she sublet a house she rented. 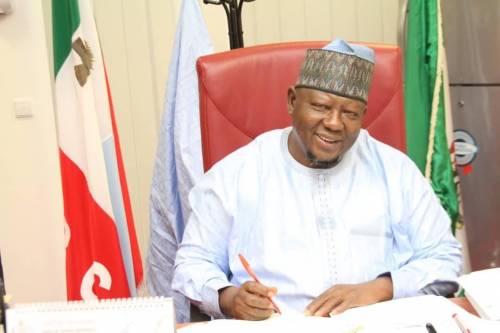 Documents showed that Amina disguised as the house owner and issued a tenancy agreement to new house seekers on a property she rented.

Newzandar News obtained copies of the illegal tenancy agreements that Hajia Amina made for the new tenants and the payment slip of monies to her account.

One of the victims paid N300,000 into her account, while the amounts the other victims paid could not be ascertained as of the time of this report.

A concerned resident had alerted the owner, Madam Ndokwa Ofili, who stays in Garki, Abuja, from whom Hajia Amina rented the house, that the Senator’s wife was suspiciously defrauding people with the house.

“Madam, good morning; someone is trying to take possession of your property in Gwarinpa, Abuja. Please reach out to whoever is appointed caretaker of the property. A concerned tenant who knows you as the owner of the property is trying to verify before she can pay the lady who is claiming ownership,” the whistleblower said in a text.

Speaking with Newzandar News, Ofili’s lawyer, Barrister Geoffrey Ugwuayi, stated that the bubble burst when they wrote to the Senator’s wife to renew her rent but was not forthcoming.

“As you are aware that your rent for the four-bedroom duplex and three rooms en suite Boys Quarters situated in the above-mentioned address, which covers the period of February 25, 2020, to February 24, 2021, had expired on February 24, which was the date of the anniversary.

“We, therefore, wish to use this medium to notify you that we have our client’s instruction to remind you to renew your rent of the sum of N3,500,000 per annum, which will cover the period of February 25, 2021, to February 24, 2022. Moreover, we wish to also bring to your notice that it is a settled law that in the absence of no contrary intention that rent is paid in advance,” the letter partly reads.

Replying through her lawyer, M.A Ajara, the Senator’s wife, has April 30, 2021, for payment but still had not done so at the time of filing this report, thereby necessitating a court notice.

“Our client acknowledges the receipt of your letter dated March 2, 2021, on the above subject matter and apologizes for not responding immediately. This is because she has not been around, and the letter was received in her absence and forwarded to her.

“In respect of the subject matter above, our client intends to renew her rent and appeal that your client gives her a little more time, within which to renew her rent. In this regard, she craves the indulgence of your client to further indulge her till the end of this month as she assures your client that the rent will be paid on or before April 30, 2021.”

Newzandar News learned that the tenants, Hajia Amina sublet the house to, are confused at the moment and are presently fighting hard to get back their rents, but they had not been able to reach the Senator’s wife.