Governor Babagana Zulum of Borno spent N350 million to mobilise the crowd for the visit of President Muhammadu Buhari to the state, Newzandar News has learnt.

Newzandar News also gathered that the governor considered the spending necessary to ensure that the Nigerian leader was not booed during his official visit to the state on Thursday. 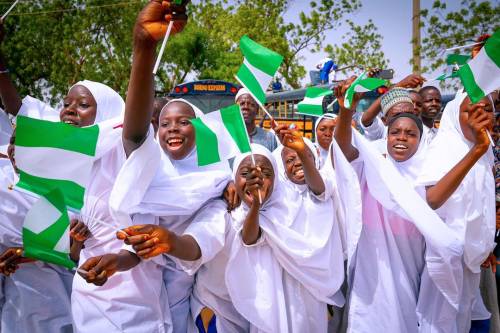 Newzandar News had reported that there were fears ahead of the President’s visit that he would be greeted by protesters or be booed because of the insecurity in the state.

“It cost Zulum N350 million to mobilise the crowd they touted as Buhari’s supporters,” a source in Borno State government told Newzandar News.

“When President Buhari visited Lagos last week, they had to fly him over the city in a chopper because of a hostile crowd,” another source added.

Governor Zulum had earlier urged residents to show appreciation to President Buhari during his visit.

The governor in a statewide broadcast on Tuesday gave reasons the people of the state should honour the President when he arrived in Maiduguri.

Borno is the epicentre of insurgency war in Nigeria.

The state has been at the end of incessant deadly attacks by terrorist groups–Boko Haram and the Islamic State West African Province (ISWAP), and many residents have grown frustrated with the Buhari government.

Ahead of his election in 2015, Buhari promised to defeat Boko Haram but six years into his government, that promise has not been fulfilled.

In February 2020, residents of the state booed the President as his convoy drove in and when it was leaving Maiduguri, Borno State, during a condolence visit.

The residents were heard shouting in Hausa “Bama so, ka samu a kunya.” Meaning “We don’t want you, because you have disappointed us.”

Buhari, during his visit to Borno, however, said he is committed to serving Nigerians as a result of the love shown to him.

This was made known in a statement issued on Thursday by the Senior Special Assistant to the President on Media and Publicity, Garba Shehu.

Buhari, during his visit to Maiduguri, Borno State, said all efforts will be made to improve the livelihood of Nigerians, starting with providing adequate security.

He also stressed that he owes Nigerians a debt of gratitude for the opportunity to serve.

Speaking at the palace of the Shehu of Borno, Buhari noted that he started his administrative career as a military officer in Borno State as a governor for seven months, under Gen. Murtala Ramat Mohammed, before he was appointed Minister of Petroleum by former President Olusegun Obasanjo, who was then a military Head of State.

Buhari was quoted as saying, “My commitment to serve Nigerians is a payback for the love shown to me. I started my political adventure in Maiduguri and I always look forward to coming here.”

He commended the Governor of Borno State, Zulum, for his forthrightness, resilience, and drive in bringing development to the state, despite security challenges.

He noted that very few leaders will take the risks Zulum had taken over the years to protect his people and promote peace and development, especially in putting his life on the line by spending nights with vulnerable people.

Zulum then thanked the President for visiting Borno State to appraise the security situation, and commission some of the completed projects in the last few years.