A Magistrate’s Court in Kogi has adjourned ruling on the bail application for two anti-President Muhammadu Buhari protesters till Friday.

Resuming hearing on Wednesday after a strike action by judicial workers was called off, the court sat on the bail application for the Buhari Must Go protesters —Larry Emmanuel and Anene Victor, who had been remanded in Kabba Prison for 66 days. 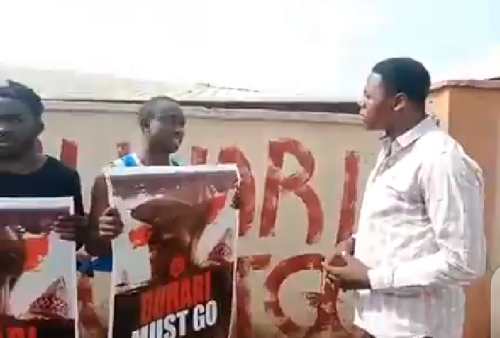 The court, which began proceedings around 9:45 am, received a motion moved by the defence counsel, Aliwo Esq, asking the court to order the release of the activists on bail, relying on the length of days which the defendants have stayed in prison.

The prosecution which had not filed a counter-application as at the time of the sitting, did not oppose motion.

The court, after listening to both sides, adjourned the date for rule on the application till Friday, June 18, 2021.

Sources told Newzandar News that the Magistrate, Tanko Muhammed did not rule in the bail application on Wednesday because he wants to consult with the state Deputy Governor, Edward Onoja, who got him for the filthy job of throwing the activists in prison illegally.

Newzandar News had reported that Emmanuel and Udoka, who have been detained by the Kogi State Government since April 5, recently began a hunger strike at the Kabba Prison as the government continued to ignore national and international voices calling for their release.

Newzandar News learnt last Friday that Emmanuel and Udoka refused to eat inside the prison, as their health condition had deteriorated as a result of the inhuman treatments meted out to them.

“Larry and Victor are now on hunger strike in Kabba prison,” a source revealed.

Newzandar News had on June 2 exposed how the Kogi State Acting Chief Judge, Justice Richard Olorunfemi, and the Chairman of the Kogi State branch of the Magistrates Association of Nigeria, Dr Tanko Muhammed, arranged a kangaroo trial for the two protesters.

It was learnt that Olorunfemi and Muhammed were the tools Deputy Governor, Onoja, used to keep the protesters in detention for about two months.