The Senate President, Ahmad Lawan on Wednesday referred the name of the All Progressives Congress member and Special Assistant on Social Media to the President, Lauretta Onochie to the Committee on the Independent National Electoral Commission (INEC) for screening as a commissioner of the electoral body.

Lawan’s directive is coming eight months after President Muhammadu Buhari asked the upper legislative chamber to screen and confirm her. 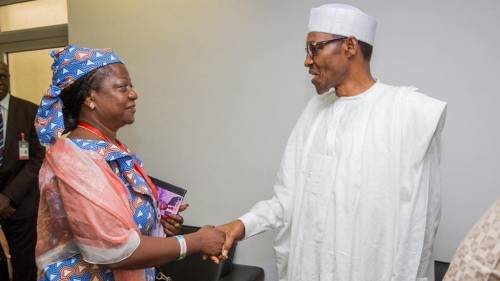 But some senators, mostly from the leading opposition party and some from the APC and civil society groups kicked against her nomination, saying she was “too partisan” to be a commissioner in an important institution like INEC.

Opposition senators said that by nominating Onochie, Buhari had “willfully gone against the constitution he swore to uphold,” and urged him to withdraw it.

“Item F, paragraph 14 of the Third Schedule of the 1999 Constitution (as amended) forbids a card carrying member of a political party to be a member of the INEC,’’ Senate Minority Leader, Enyinnaya Abaribe, quoted in a short statement.

Also, the National Publicity Secretary of the Peoples Democratic Party (PDP), Kola Ologbondiyan, said the nomination Onochie as INEC national commissioner supported the position of the party that Buhari’s statements “were mere glib talks on electoral sanctity and clearly demonstrates that he has no plans whatsoever to leave a legacy of credible polls.”