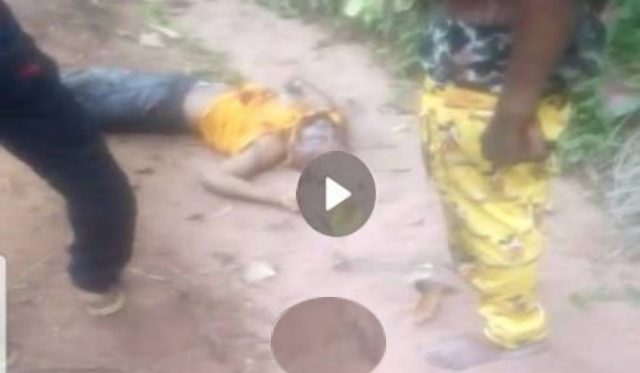 Gunmen have shot dead a middle-aged man alleged to be one of the informants used by the Nigerian Army to give away the late commander of the Indigenous People of Biafra’s Eastern Security Network (ESN), Ikonso Don.

Newzandar News learnt that the victim, whose name had yet to be ascertained, was gunned down in a village between Imo and Anambra states, where he was believed to be hiding.

Newzandar News obtained the graphic images of the corpse of the victim, who was shot dead along a footpath in the village while the gunmen escaped from the scene.

“The victim is alleged to be the informant the military and the police used in getting Ikonso’s location and in killing him. Some said the informant was also a member of the ESN but others said he was a former IPOB member, renounced them and came to the village to hide. But he has now been killed,” a source stated.

Newzandar News had on April 26 reported that the Nigerian Army ‘s operation against the ESN and IPOB in Awomama Village in the Oru East Local Government Area of Imo State led to Ikonso Don’s death, who was an ESN top commander.

The army and the police intelligence team had killed Ikonso, known as Vice President, and six other IPOB commanders during the raid.

The army had confirmed that an officer and three policemen were also shot dead by the ESN during the gun battle on Saturday.

The then Director, Army Public Relations, Brig Gen Mohammed Yerima, had released a photograph of Ikonso with IPOB Leader, Nnamdi Kanu, as well as of the shrine where the ESN and IPOB fighters reportedly gathered in Oru East.

The army spokesman had revealed that they had been on the trail of Ikonso and other ESN commanders for weeks before he was finally captured.

“The IRT and DSS teams along with troops of 82 Division of the Nigerian Army have been on the trail of the terror group since the unfortunate attacks on the Imo State Police Command and the Owerri Correctional Center on April 5.

“The said Ikonson Commander, who was the mastermind of those attacks in addition to multiple attacks in the South-East and South-South regions, was neutralised along with six of his top Commanders,” the military had said.

Sources had also told Newzandar News that Ikonso was also given away by some of his photographs shared on the social media as well as by some of his friends, who had been in touch with security agencies for weeks, if not months.

“Ikonso Don was a well-known hardcore IPOB member. When the ESN was launched, he joined and participated in several operations, rising to later become a commander. He was going to his village in Umuoma alongside other ESN members when they were ambushed.

“He was targeted and killed after some of the Igbo he was fighting for gave out his details to the security forces,” a source had explained.

“His photographs were also shared on social media by a friend and he was given away as the ESN commander. That was the same place his photograph with Nnamdi Kanu was obtained,” another source revealed.