President Muhammadu Buhari scored a cheap political point on June 6, 2018, eight days after May 29, 2018, when his government declared June 12 as the country’s Democracy Day.

Buhari’s action was to honour the late Chief MKO Abiola’s struggles for democracy till his death but several policies, actions and inactions of the Buhari regime have proved that he (Buhari) does not believe in democracy. 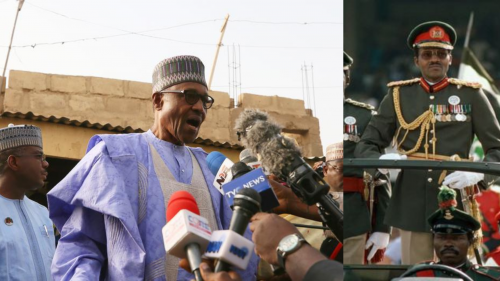 Winner of the 1993 Presidential election, Abiola died in suspicious circumstances on the day he was due to be released, which was July 7, 1998.

Many believe that Buhari’s decision to mark 12 June as Democracy Day was a political deception to cajole the South-West people who had always set aside June 12 to remember Abiola’s stolen mandate and an annulled election that many still view as the freest and fairest in the history of Nigeria and democracy.

catalogues just seven out of the many anti-democratic gaffes of Buhari’s clueless government.

One – Clampdown, maiming and killing of peaceful Lekki Protesters on October 20, 2020

In October 2020, Nigerian youths came out en masse to enforce their democratic rights by peacefully protesting nationwide against police brutality and torture.

Instead of the president openly condemning the violence, Buhari on December 9 rather said he was “disgusted with the foreign media coverage of the protests.”

“I was disgusted by the coverage, which did not give attention to the policemen that were killed, the stations that were burnt, and prisons that were opened. (They said we are all at fault. We don’t have the sympathy of anyone. We are on our own),” Garba Shehu, presidential spokesman, quoted Buhari to have said.

Meanwhile on December 16, human rights activist and Senior Advocate of Nigeria, Femi Falana, said the identities of Nigerians who were killed and brutally injured during the recent EndSARS protests in Abuja, Lagos, Oyo, Edo and other parts of the country would be revealed. And they were, although to the continuous denial of the government.

In the second week of May 2021, President Buhari held a meeting with the service chiefs and the Inspector-General of Police at the Presidential villa, Abuja, telling them to adopt certain security measures in the South-East which would involve the deployment of maximum force against the agitators who are demanding self-determination and protesting against marginalisation and insecurity of their communities.

“The police and military have been recording casualties in the South-East during raids and gun battles with the criminals disturbing the region. Therefore, the focus would shift more to air power in the coming weeks. Combat helicopters and other aircraft would be deployed to conduct massive raids on the hideouts from the air. It does not matter whether the hideouts are for the Indigenous People of Biafra or its armed outfit, what the military is looking for are criminals,” a source had revealed.

Last Friday, the Minister of Information and Culture, Lai Mohammed, announced the suspension of Twitter in a statement signed by his Special Assistant Segun Adeyemi, citing the “persistent use of the platform for activities that are capable of undermining Nigeria’s corporate existence”.

The Minister said the Federal Government had also directed the National Broadcasting Commission (NBC) to immediately commence the process of licensing all OTT and social media operations in Nigeria.

The development comes after Twitter deleted President Muhammadu Buhari’s tweet where he threatened to treat Nigerians “misbehaving” in “the language they understand”.

Buhari had in a tweet on Tuesday stated that his government would get “harder” on those hell-bent on destroying the country.

He said those wanting to destroy his government would receive the shock of their lives as his administration would do everything possible to ensure they fail.

The president said the sponsors and orchestrators of insecurity in the country are doing so because they want his administration to fail.

“Many of those misbehaving today are too young to be aware of the destruction and loss of lives that occurred during the Nigerian Civil War. Those of us in the fields for 30 months, who went through the war, will treat them in the language they understand,” he had said.

President Buhari threw a pharmacist, Solomon Akuma, into prison. The government was bold to say that Akuma was detained because he had threatened to hire an assassin to kill Buhari and his former Chief of Staff, the late Alhaji Abba Kyari.

Despite public outrage and criticisms by civil societies, a Federal High Court sitting in the Federal Capital Territory, Abuja, on Tuesday again refused to grant bail to Akuma, a pharmacist who criticised President Buhari on his Twitter page.

Akuma, 29, was arrested on April 2, 2020, in Aba, Abia State for allegedly posting a comment on social media against the President and his late Chief of Staff, Abba Kyari.

Akuma had spent three months in detention without a court order or trial until he was eventually arraigned for charges bordering on terrorism, sedition, criminal intimidation of the President, and threat to life of Buhari.

He had been languishing at the Force Criminal Investigation Department before the police lawyer, Victor Ogbudo, filed an application seeking the permission of the court to transfer the young man from the police custody to the correctional centre.

Despite the leader of the Islamic Movement in Nigeria, Ibrahim El-Zakzaky and his wife, Zeenat, falling ill in January 2021 at the Kaduna State Correctional Centre where they are both being held, the government refused to let them go.

Though a Muslim, El-Zakzaky, spent his sixth consecutive December 25 behind the bars last year.

El-Zakzaky and his wife, Zeenat, were arrested by security operatives on December 14, 2015, after a clash between his followers and officers of the Nigerian Army.

At least 500 Shiites were killed during the incident with no army officer charged for the crime ever since.

But,El-Zakzaky and Zeenat have remained in detention despite several court orders for their release. They are both facing eight counts of culpable homicide, unlawful assembly and disruption of public peace, among others.The government accused the IMN of not recognising the Nigerian constitution and authority. His prolonged detention has fuelled several protests by members of the Shiite movement in many Nigeria cities.

Acting under the whims and caprices of the Kogi State Deputy Governor, Edward Onoja, the Kogi State Acting Chief Judge, Justice Richard Olorunfemi, and the Chairman of the Kogi State branch of the Magistrates Association of Nigeria, Dr Tanko Muhammed, arranged a kangaroo trial for two Buhari-must-protesters, Larry Emmanuel and Victor Udoka, who have been detained by the Kogi State Government since April 5.

had on May 5 reported that Nigerians held a protest march in the Federal Capital Territory, Abuja, to demand the release of two Buhari-must-go protesters.

The protesters, while condemning the continued detention of the duo, had demanded that the Federal Government must wade in and get the innocent citizens released.

They had carried protest banners, with inscriptions such as, “Yahaya Bello, Where is Emmanuel Larry?”

The two protesters, who were arrested, were molested by thugs sponsored by the Kogi State Government and detained by the police, had also fallen critically sick.

learnt that the two protesters had also been denied medical treatment.

A month ago, global human rights’ organisation, Amnesty International, had demanded the unconditional release of the two Buhari-must-go protesters, adding that the protesters’ only crime was that they were “peacefully protesting against corruption and distributing posters that were perceived to be critical of the President.”

Amnesty International had said that the activists “were physically assaulted and tortured by unidentified men while peacefully protesting against corruption, and the poor human rights situation in Nigeria, and distributing posters that were perceived to be critical of the President.

“A few days later, they were turned over to the police and were subsequently transferred to the Nigeria Correctional Centre, located in Kogi State, in north central Nigeria, where they are currently being held.

“The two activists are being detained solely for peacefully exercising their right to protest and expressing their views. They must be immediately and unconditionally released,” AI statement partly read on Monday.

The Buhari government refused to sack the Minister of Communications and Digital Economy, Isa Pantami, over his established links with terror groups, despite the public outrage which greeted the discoveries.

Instead of listening to the national voice, the president has continued to pamper his ministers and corruption is silently growing again under the current administration.