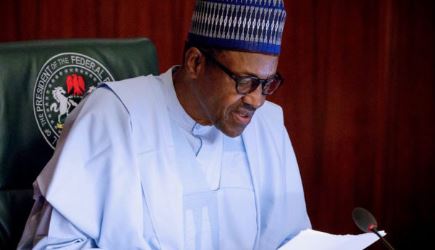 President Muhammadu Buhari has commiserated with the governor of Katsina State, Alhaji Aminu Bello Masari, over the death of his mother-in-law, Hajiya Fatima Ibrahim Maude(Tagari).

The President, in a statement issued by his Senior Special Assistant on Media and Publicity, Mallam Garba Shehu, described the departed Hajiya Tagari as a worthy role model.

“President Muhammadu Buhari has condoled with Governor Aminu Masari of Katsina State over the death of his mother-in-law, Hajiya Fatima Ibrahim Maude(Tagari), aged 72.

“In a condolence message to the Governor and his second wife Hajiya Zakiyya Aminu Bello Masari, the President told the Katsina First Family that he is saddened by the loss of Hajiya Fatima Tagari, describing her as a venerable mother and worthy role model to her children and grandchildren”, statement said.

The statement also quoted the President saying “my heart and prayers go out to Governor Masari and family members of the deceased. May Allah forgive her gentle soul and reward her noble and worthy deeds with paradise”.

Bauchi State Governor By Charly Agwam – Bauchi Bauchi state governor, Bala Mohammed has signed 2 executive orders in a bid to control the spread of coronavirus in the state. The governor, on Tuesday, signed [Read more…]

We dont Have Land For Fulani Settlement, We Only Have Water – Wike Tells Northern Leaders, Others

The Rivers State  Governor, Nyesom wike has urged the Northern alliance involve in cattle rearing business in Nigeria to stay clear from Rivers state, reciting that there is no available land for fulani Settlements in [Read more…]