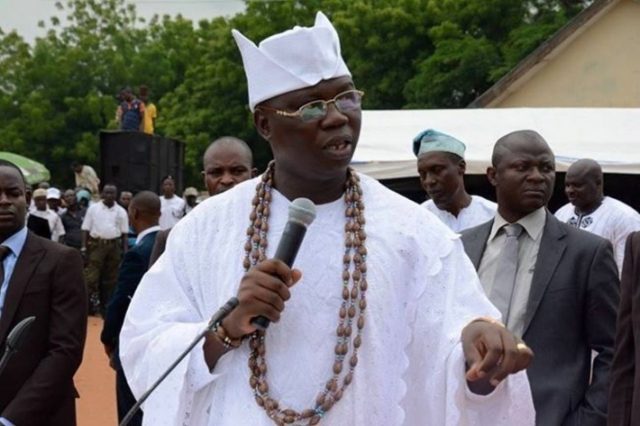 The Aare Ona Kakanfo of Yorubaland, Iba Gani Adams on Wednesday wrote a letter to the international community over the insecurity in Nigeria, seeking intervention to put an end to the killings and carnage in the region.

In a letter made available to Newzandar News, Adams wrote the Secretary-General, United Nations (UN), Chairperson of the African Union (AU), Secretary of State, United States (US).

We Live In Fear, Fulani Herdsmen Have Taken Over Our Lands, Highways — Farmers, Residents Says As They Protest In Edo

The letter, personally signed by the Aare Onakakanfo, is titled: “Urgent Need to stop killings by Fulani Herdsmen in Yorubaland.”

In the letter, he expressed concern and worry over the incessant killings in the South-West.

He said: “This is to bring to your attention ‘a clear and present danger’ threatening the fragile union of our great country, Nigeria.

“Senseless killings and massacre of Nigerians, almost on a daily basis, are tragically sliding toward an anarchical terminal point.

“While you already know, through diplomatic sources and the media, what is going on in the world’s most populous black nation, Nigeria, I want to urgently alert you that an agenda bordering on pogrom is gradually being executed in Yorubaland.”

Adams emphasised that it is incumbent on the global community to intervene and holistically address the issue, pointing out that statistics of prominent Yoruba people who have been murdered by killer-herdsmen and their collaborators are increasing daily.
“Yorubaland has been put under serious pressure through payment of ransom – running into millions of naira – demanded by these conscienceless, unscrupulous, and ruthless murderers.

“Now, the agitation for them to leave our land has reached an alarming crescendo and the backing (that is the belief of our people) given to them by the Federal Government to continue to lay claim to the fact that ‘nobody can chase anybody away from any part of the country’, is not helping matters.

“The peace, stability, and tranquility of Yoruba people in this geographical space called Nigeria are being tested by blood-thirsty maniacs through invasion of our land.

“In our space, these herdsmen are accused daily of committing rape, kidnap, and murder.

“The invasion of Igangan, a rural community in Ibarapaland, Oyo State on June 6, 2021, leading to the massacre of scores of residents by these same band of roving killers, who prefer to stay in the forest because of their murderous intent, seems to be the last straw,” he lamented.
He, however, urged the global community to urgently intervene in the situation.

He maintained that the earlier the global community intervened, the better it would be for the most populous African country.

“It may happen soon because all the security establishments are already showing signs of virtual ineffectiveness.

“Your Excellencies, if something urgent is not done, these series of attacks will soon have a negative effect on Western countries’ investments in Nigeria,” he added.