Two Manhattan doctors removed a lethal tumor the size of a cantaloupe or pawpaw from a 5-year-old Ethiopian girl’s face in an intense, hours-long surgery and she proudly showed off her new mug on Tuesday.

According to New York Post, Nagalem Alafa, who lives in a rural village in the African country, has never had access to specialized health care, and since birth has suffered from a “vascular malformation” on her face that’s kept her out of school and prevented her from socializing with kids her own age. 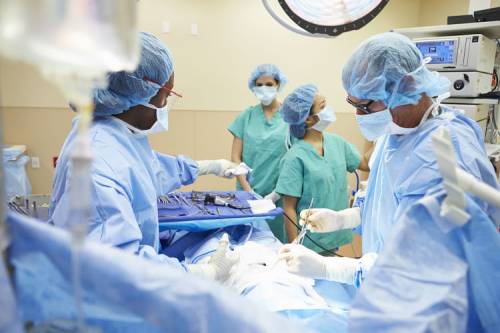 “They were hiding her at home,” explained Kalkidan Alemayehu Gebremariam, who’s been helping the child and her father translate after they came to New York for the surgery in late June.

The benign growth has been developing “rapidly” since birth and Nagalem would’ve suffocated or starved, due to the inability to swallow, if the tumor wasn’t removed.

Luckily for her, a US government official met Nagalem in Ethiopia last year while on a mission and decided to help.

Following a worldwide search for doctors who could treat the rare condition, the official found Dr. Teresa O and Dr. Milton Waner, a married couple and surgical dream team from Lenox Hill Hospital, which agreed to conduct the $500,000 procedure pro bono.

“This is why I became a doctor,” Waner told New York Post on Tuesday during a press conference at the hospital to unveil Nagalem’s new face.

“This type of surgery is very difficult, very dangerous, and certainly life-threatening. We explained what would happen to the child’s father. There was a possibility she may not make it.”

He said the condition is rarely seen in the US because kids typically get such a growth removed well before it reaches the size of Nagalem’s tumor.

The child underwent the complex, 12-hour operation on June 23, when O and Waner dissected her facial and neck nerves and carefully removed the tumor and parts of her skin, which had grown around the malformation.

The surgeons had to “cautiously navigate branches of nerves and vital arteries” that could’ve caused paralysis, severe blood loss and death if they were accidentally severed, the hospital explained.

The surgery was a success and when Nagalem was wheeled out of the operating room, her father dropped to his knees and thanked God when he realized that she had made it.