A former Army officer now civilian, Emmanuel Odaudu, has regained his freedom after having been detained in the Nigerian Army Special Investigation Bureau underground cell in Abuja for several months over an old Facebook video that was re-posted.

It was gathered that Emmanuel was released on Friday, June 11, 2021, following the involvement of human rights lawyer, Femi Falana, Punch reports. 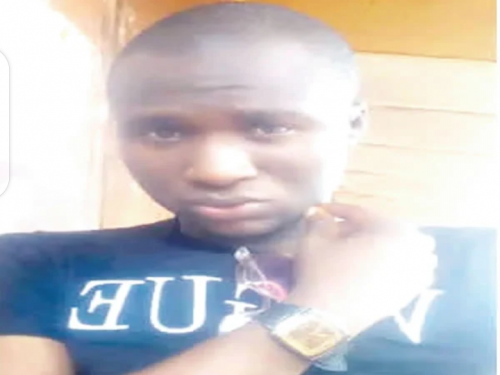 Falana had described Emmanuel’s continued detention by the military as illegal and unconstitutional, adding “Our law firm is taking up this matter and we are going to demonstrate through this case that the Nigerian Army has no power under the law to arrest a civilian without transferring him/her to the police in line with the provisions of the Administration of Criminal Justice Act.”

Emmanuel’s mother, Helen, who confirmed his release to Punch on Tuesday, however, said the case against her son was still ongoing.

The joyous mother stated, “My son has been released, but when I went to see the lawyer representing us from Falana and Falana Chambers, he said the case is still on and that the Army is not withdrawing it.

“He was released on Friday, June 11, 2021. I was very happy when I saw him; it was like a dream come true. I appreciate God, the Falana and Falana Chambers and every other person, who stood by me during my trying period.”

Newzandar News had reported how Emmanuel in March 2020 dragged the Nigerian Army to court over his continued unlawful detention.

In the suit filed by his lawyer, Abubakar Marshal of the Falana & Falana Chambers at the Federal High Court, Emmanuel sought a declaration that his arrest and subsequent detention on June 12, 2020, without warrant of arrest was illegal inter alia.

When Emmanuel’s mother, Helen Odaudu spoke with Newzandar News in February, she explained that while her son was in the Army, he posted on social media short videos of himself rapping while in uniform.

The videos, some of which went viral, reportedly infuriated the military authorities, leading to his arrest and detention for three months.

According to her, Emmanuel was later released but told he would be redeployed to Maiduguri over the matter.

However, while waiting for his redeployment, the Commanding Officer, 29 Battalion Nigerian Army, Bori Camp, Port Harcourt, dismissed her son over another video he made months before his detention.

Helen said Emmanuel returned home after his dismissal and was busy with his life when the military tracked him to Otukpo, Benue State, on June 12, 2020, on the allegation that he impersonated a soldier in the old videos on social media.

She said, “My son told me he made a post on Facebook advising people to get their permanent voter cards to vote for good governance. He was also wearing his uniform in that video, but he deleted it almost immediately. Before he deleted it, a celebrity, Charly Boy, had reposted it and the commanding officer told him he had been dismissed because of that video. After his dismissal on October 5, 2017, my son returned home.

“What happened was that Facebook shared the memory of my son’s old video and the military authorities can verify that on his page. But because he was a civilian as of the time Facebook reposted the video, they said he was impersonating.

“They blindfolded him, chained both his hands and legs and took him away without disclosing their destination to us.”

She added, “When I heard my son’s voice two months after he was arrested in Otukpo, I was happy because I thought they had killed him.

“My son has been in the underground cell for more than seven months now; he has been tortured like a criminal and refused trial. My son is no longer an officer; whatever the offence, why can’t they hand him over to the police for trial in a conventional court? I come from the barracks, the army doesn’t arrest and keep civilians in detention for more than 24 hours, why is my son’s case different?”