The Governor of the Central Bank of Nigeria, Godwin Emefiele, is currently currying the favour of the National Assembly’s top echelon by awarding to them Bureau de Change licences.

Newzandar News learnt that principal and vocal members of the National Assembly have been awarded the licences by Emefiele so that they could mellow down on the several probes of infractions and misappropriations concerning the CBN. 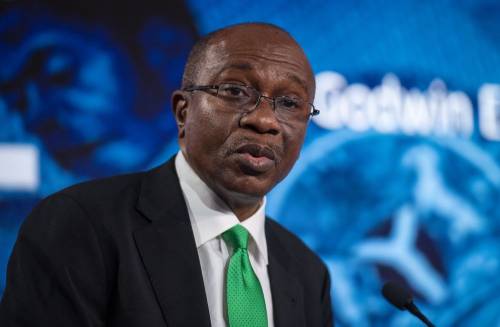 Newzandar News gathered that some of the legislators used third-party companies to obtain the licences from the CBN while others who did not have the required financial deposits were also assisted by the CBN governor to access government loans.

Top sources familiar with the incident decried the CBN gaffes, lamenting that Emefiele is scandalising the operations of the apex bank because his administration was indicted in the alleged mismanagement by the Nigerian Incentive-Based Risk Sharing Systems for Agricultural ending (NIRSAL) Microfinance Bank and the diversion of public fund.

The attempts by the National Assembly to probe into these CBN NIRSAL allegations had reportedly prompted the ‘settlement’ by the CBN governor.

An insider source said, “The latest in these probes is the settlement of the principal and vocal members of the National Assembly with Bureau de Change licence by the CBN governor who is under investigation for several infractions before the same Assembly.

“The governor has issued the licences to these legislators through the companies of their choice and many used third party companies. Some of the legislators who claimed to lack the required financial deposits were also assisted to access loans by the CBN governor.”

Other sources listed infractions involving the CBN governor and his role in diverting the traditional agricultural insurance responsibility of the government insurance company to private companies in which his family members have an interest.

“The 9th Assembly of National Assembly under Senator Ahmad Lawan and Femi Gbajabiamila can better be described as a compromised and silenced legislative arm of government under the current dispensation. No thanks to free access to contracts, cash, and patronage from strategic revenue-generating agencies under the legislative supervisory power of the legislators.

“The legislators and their principal officers have graduated from constituency project implementation to allocation of slots in employment, where the current Minister of Humanitarian Affairs also settled them with N-Power and conditional Cash Transfer slots contrary to principles guiding the projects,” another source stated.