The planned attack on Sowore and other activists is coming few days after Asefon and his executive members collected N70 million from the Nigerian government and Kogi state governor, Yahaya Bello. 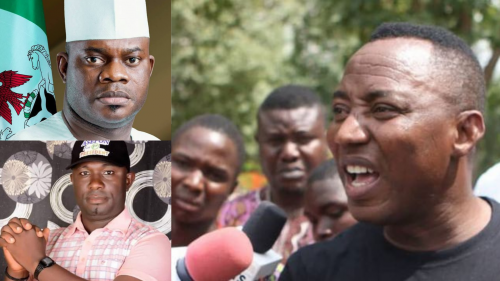 In a video obtained by , the NANS leaders were also seen threatening the human rights activists.

“They are actually planning to attack Omoyele Sowore in Abuja as we speak. They got over N40 million from the Nigerian government through the management of Petroleum Product Marketing Company (PPMC), a subsidiary of Nigerian National Petroleum Corporation (NNPC).

“They also received over N30 million from the Minister of Sports, Sunday Dare, and Governor Yahaya Bello.

“The police and DSS (Department of State Services) are both aware of the plan; they directed the NANS leaders to work with Kogi deputy governor, Edward Onoja to perform a hit on Sowore in Abuja.

“They have started strategising on how to attack Sowore, they are currently lodged in a hotel in Abuja. The initial plan was a fake protest for June 12, hoping the team led by Sowore would accidentally join the protest. With this, they would turn the protest to a violent one and attack Sowore and others but they cancelled the plan after your (‘) story,” a source told .

had last week exposed how Asefon in a meeting with Nigeria’s Inspector General of Police, Usman Alkali Baba promised to mobilise against those planning to protest on June 12, using his power as NANS President.

“He met with the Inspector of General of Police, Usman Alkali Baba three days ago but the IGP refused to take pictures with him, telling him there was a crisis in NANS and he was not sure Asefon was in control.

“Asefon then told him he is the original President with the structure of the students’ body.

“He then asked the IGP for assistance and the condition given to him was to mobilise against the people planning protests on June 12 if truly he is the original NANS President.

“He immediately promised the IGP to consider it done. He said they would initially join the rally and later disrupt it,” a source had told .

The newspaper also revealed how the Nigerian government ordered the management of PPMC to pay Asefon N40 million to mobilise thugs in major cities across the country with police cover and unleash terror on genuine protesters on June 12.