Four people suspected of being involved in the assassination of President Jovenel Moïse of Haiti were killed by the police in a gun battle and two others were arrested, Haiti’s police chief said late Wednesday.

The chief, Léon Charles, also said that three police officers who had been held hostage were freed, The New York Times reports. 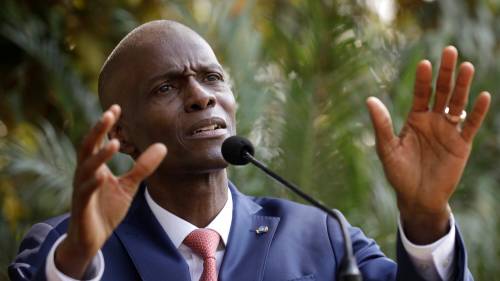 “The police are engaged in a battle with the assailants,” he said at a news conference, noting that the authorities were still in pursuit of some suspects. “We are pursuing them so that, in a gunfight, they meet their fate or in gunfight they die, or we apprehend them.”

The authorities did not name any of the suspects or cite any evidence linking them to the assassination.

Millions of Haitians anxiously huddled around radios and televisions throughout the day, staying off the streets as they tried to understand who killed the president, why and what the coming days might mean for the country. The assassination has created a political void that threatens to deepen the turmoil that has gripped Haiti for months.

Ms. Moïse was transported to a hospital in southern Florida for treatment and she is said to be in a critical but stable condition.

“A group of unidentified individuals, some of them speaking Spanish, attacked the private residence of the president of the republic and thus fatally wounded the head of state,” the prime minister said, but there was little solid information about who might have carried out the assassination.

In an interview with The New York Times, Mr. Joseph said he was the one running the country at the moment.

Still, it was unclear how much control he had, or how long it might last.

A new prime minister had been scheduled to replace Mr. Joseph this week, and the head of the nation’s highest court, who might also have helped establish order, died of Covid-19 in June.

Later Wednesday, in a televised broadcast to the nation, Mr. Joseph presented himself as head of the government and announced that he and his fellow ministers had declared a “state of siege.”

“Let’s search for harmony to advance together, so the country doesn’t fall into chaos,” he said.

He also vowed that the commando unit that had carried out the assassination would be brought to justice.

The news of Mr. Moïse’s assassination rocked the Caribbean nation 675 miles southeast of Miami. But it had already been in turmoil.

In recent months, protesters had taken to the streets to demand Mr. Moïse’s removal. He had clung to power, ruling by decree for more than a year, even as many — including constitutional scholars and legal experts — argued that his term had expired. Others, including the United States, backed his position that his term did not end until next year.

Armed gangs control many streets and have taken to kidnapping even schoolchildren and church pastors in the middle of their services. Poverty and hunger are on the rise, and the government has been accused of enriching itself while not providing even the most basic services.

More than two centuries ago, Haitians fought to throw off the yoke of colonial France and bring an end to to one of the world’s most brutal slave colonies, which had brought France great wealth. What started as a slave uprising at the turn of the 18th century eventually led to the stunning defeat of Napoleon’s forces in 1803.

But the suffering of the Haitians did not end with the ouster of the French.

More recently, the country suffered under more than two decades of dictatorship by François Duvalier, known as Papa Doc, and then his son, Jean-Claude, known as Baby Doc.

In 1990, a priest from a poor area, Jean-Bertrand Aristide, was elected president. But in less than a year, he was deposed in a coup.

Since a devastating earthquake 11 years ago, the country has not rebuilt, and many say it is worse off, despite billions of dollars of reconstruction aid.

On Wednesday, Mr. Joseph said that the president had been “cowardly assassinated,” but that the murderers “cannot assassinate his ideas.” He called on the country to “stay calm” and said he would address the nation later in the day.

The local Haitian newspaper, Le Nouvelliste, citing a local justice of the peace, reported that President Moise’s body had been riddled with 12 bullets, and that two of his children had been home during the attack.

Mr. Joseph said the country’s security situation was under the control of the police and the army. But international observers warned that the situation could quickly spiral out of control.

Didier Le Bret, a former French ambassador to Haiti, said the situation in Haiti had become so volatile that “many people had an interest in getting rid of Moïse.”

He said he hoped Mr. Joseph would be able to run the country, despite his lack of political legitimacy.

Mr. Le Bret criticized the international community for ignoring the volatile political situation in Haiti and said it should now come help the country “to ensure a smooth transition.”