Olawoyin allegedly sold a property at 22, Bello Street, Off Oluwalogbon, Ikosi Ketu, Lagos to another person after already collecting money from the victim. 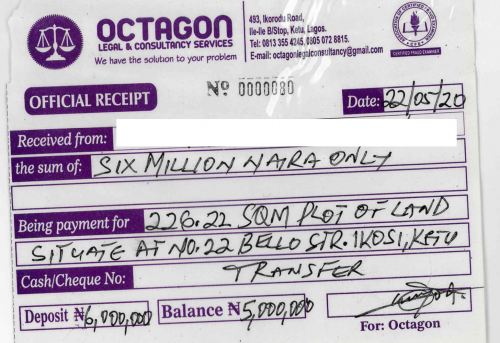 The victim, who preferred to remain anonymous for security reasons, saw said property last year and enquired about it from Olawoyin through the numbers on the advert. He said the lawyer, after collecting money went ahead to sell the property to another person, a United States-based man.

He told Newzandar News on Wednesday that he proposed to sell about 450 sq km piece of land for N22 million for 2 people to share. Olawoyin said he paid in June 2020 and was given a receipt for payment and bid, with a promise that he would gain access to the land when the second buyer paid.

However, the story began to change as the other buyer did not come till December 2020, when the lawyer, who also had the power of attorney informed him that a buyer had shown interest, not knowing he had sold the complete property to another party who had started building on it.

The victim told Newzandar News that he the beneficiary also attested that he had the power of attorney but trouble began when he could not reach him at the beginning of this year that he promised to give him the documents.

He said he was shocked when he called him with a German line to tell him that he had travelled out and that he would refund him when he got back to Nigeria.

“The lawyer was given the power of attorney to sell a property at Ketu Ikosi. His name is Olalekan Olawoyin. He put his banner on the property for sale. The beneficiary also confirmed that he has been given the power of attorney to sell the property. The beneficiary was based abroad. The owner of the property was a woman and she’s dead. The younger siblings of the deceased were having a disagreement over the house and the case was taken to court.

“He wanted to sell the whole property at N22 million, but when I could not afford it, we agreed that he should sell half to me at N11 million. He collected money from me, gave me a receipt for payment and also the bid. He assured me that when the second person that would buy the land paid his share of the money, we would have the right to access and clear the place. This happened in June 2020. He said because of the COVID-19, the second person was affected financially and I should give him time.

“He asked me to take my surveyor there and I did. He also told me that the first person to pay could choose the portion he wanted and I was privileged to do that. I took a loan to buy that place, so I started disturbing and he was begging me. The land was about 450 sq km to be shared into equal halves,” the man said.

Further recounting his ordeal, he lamented how he had exhausted all efforts by approaching different agencies to help, but all showed little or no concern as they had turned him into a money-dispensing machine. He, however, said a popular lawyer, Monday Ubani gave him some hope after he had considered committing suicide.

“I have reported the case at the police station at Ketu but they were just asking me to bring money. When I reported at Ubani Chambers, he really helped and tried his best. Later, he sold the whole property to another person, a third party. He sold it in December 2020. He called me on December 19, that by January 25, 2021, everything would be sorted out.

“He said he would call me and the second person to his Chambers. He had sold the complete property to another person. The person is based in the United States. He said he would give us the original documents that day, and we would sort out who to hold the original (documents).

“It was the person that he sold the property to, that told me that he came to Nigeria that December 19 because he knew he was going to check the property. The buyer said he saw the advert to sell it online. He came to inspect it. He told him that he was going to leave Nigeria on January 25, 2021.

“After January 25, that he didn’t call me. I called, he didn’t pick up and I sent him a message. He called me with a German line and said he was no longer in Nigeria. He began to say a lot of things, that the property had a case and he didn’t want me to fall victim, so when he comes back home, he will refund me. He even told me that I should not involve anybody,” he said.

He went on to say that from his findings, Olawoyin had relocated to Germany since childhood and raised his family there. He said he has a house where he stays whenever he is in Nigeria— 10, Rasaki Bello Street, Ketu, Lagos. He uses one flat and has rented three flats out.

The victim’s complaints have not yielded any result, so he begged Nigerians to help him get Olawoyin, adding that he had stopped answering his calls on the German line.

He said Olawoyin has also been changing phone numbers for five months.

Another lawyer, Akin Akinduro who released the documents from the Ministry of Justice when the property was having issues has disappeared into thin air as well, according to the victim.

The man disclosed that the man that bought the complete property had built on it and rented it out. He told him to settle his matter with Olawoyin and not him.

“When I got to the property, I saw that another person had been developing and building on it. I took some soldiers there to stop the building project on the land. I did that to create awareness so that the buyer would know there was an issue with it. The buyer also went to bring mobile police personnel. He had the backing of Olalekan Olawoyin who told him to continue with the project, that he would refund me anytime he got back to Nigeria.

“The police have just been collecting money from me. I reported the case to the Ministry of Justice at Alausa Secretariat in Ikeja. The Land Grabbing Taskforce has invited him three times, including the current buyer, nobody showed up, including the lawyer that released the documents from the Ministry of Justice. The buyer had completed the building and rented it out.

“To make matters worse, the buyer, I learnt is also a lawyer and was threatening me as well. He said I should deal with the person that took money from me, not him. From my findings, Olawoyin of a man doesn’t have a family here in Nigeria. He has relocated to Germany since childhood and raised his family here. His wife and children are Germans. His siblings are not in Nigeria. One is based in the United States and he was last seen in Nigeria in 2012.

“I have been to so many places, the Special Anti-Fraud Agency said the Interpol are the ones to get him arrested. I went to the German Consular at Walter Carrington in Victoria Island, and they said they could not do anything except Nigeria Police write the German Police about the case. My Germany-based friend helped me to call him, he didn’t pick up.

“I went to Area H at Ogudu Police Station, they advised me to trace all his bank accounts which I paid into. We realised he even owed FCMB N5 million. I have been in trouble since last June. I had considered committing suicide over this matter if not for Monday Ubani that came to my rescue and gave me some hope. All law enforcement agencies are just demanding money from me,” he said.