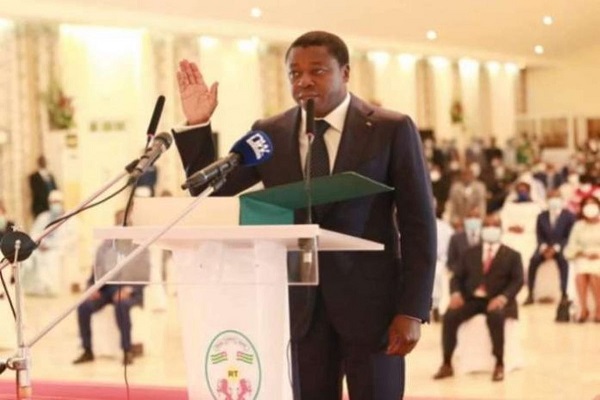 Togo’s President Faure Gnassingbe was inaugurated on Sunday at a ceremony that was minimized to prevent the spread of the novel coronavirus.

About 200 guests – all wearing face masks and practicing social distancing – attended the ceremony.

With borders closed, it was only attended by diplomats already in the country.

The televised ceremony was shortened to just over 80 minutes, without the usual pomp and ceremony.

Gnassingbe, 53, won by a landslide in February, extending his 15-year reign by another five years.

The inauguration went ahead despite measures to contain the coronavirus pandemic in the small West African country, which has recorded 123 cases and nine deaths, according to the Africa Centre for Disease Control and Prevention.

Gnassingbe was sworn in despite the objections of his political rival, former prime minister Agbeyome Kodjo, who won 18.37 percent of the vote.

Military police detained Kodjo in April after he declared himself president-elect.

In continuation of its robust support for arts and entertainment, the grand masters of data, Globacom, has been unveiled as the Headline sponsor of Super Story on African Independent Television (AIT) from September, 2020. Super [Read more…]

‘No resumption of schools in Lagos for now’

Omolola Afolabi The Lagos State Ministry of Education has denied social media reports regarding a new set of guidelines for schools resumption in the state. The Ministry, through its Public Affairs Head, Mr. Kayode Abayomi [Read more…]

The Vice-chancellor of the University of Lagos, Professor Oluwatoyin T. Ogundipe has been sacked at the Council’s meeting held Wednesday, 12th of August at the National Universities Commission (NUC) headquarters in Abuja. Prof. Ogundipe was removed [Read more…]