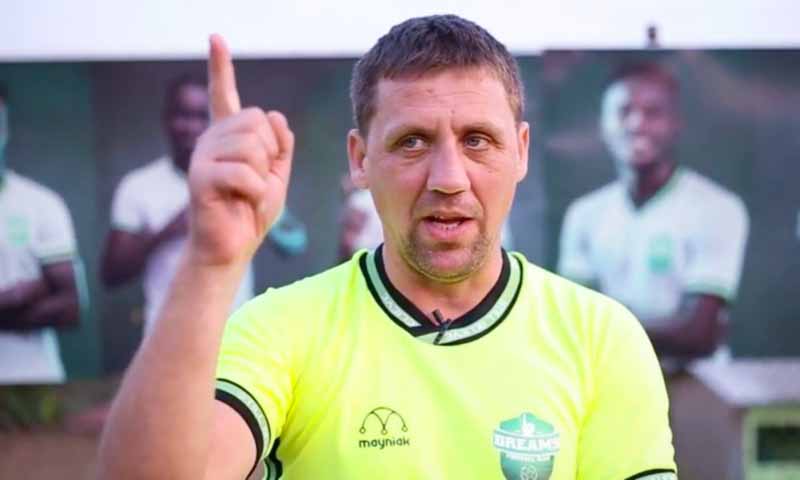 Dreams FC head coach Vladislav Viric has been fined GHc 2,000 and will serve a one-match ban for breaching Article 34(6)(d) of the Ghana Premier League Regulations, 2019.

The Dreams FC gaffer made certain comments on officiating in his side’s 3-1  defeat to Asante Kotoko on matchday 23 fixture at the Len Clay Sports Stadium.

The Porcupine Warriors came from behind to beat Dreams 3-1 in that game.

Agyenim Boateng scored from the spot-kick for Dreams FC before Michael Vinicius got the equalizer through a header.

Abdul Ganiyu and Francis Kumi scored the other two goals for Asante Kotoko to seal the win for the home side.

In the post-match interview, the Serbian coach lamented on officiating and said ‘they called some people to help them, they are in black, you know, to help them to be better the game’.

His comments were referred to the Ghana FA Disciplinary Committee for sanctions.

According to the Ghana FA the comments is likely to bring the game into disrepute.

Vladislav Viric in a written statement to the GFA Disciplinary Committee pleaded guilty to the charge and has been fined Ghc 2,000.

He will also miss Dreams FC game against Eleven Wonders on matchday 30 at the Theatre of Dreams, Dawu.

The Serbian trainer has been asked to also publicly apologize to the Referees of the GFA and the entire Association in order to avoid a six months ban.