Ifeanyi Ejiofor, the lawyer representing the detained leader of the Indigenous People of Biafra, Nnamdi Kanu, has stated that the Nigerian government is presently paying false witnesses to appear in court on July 26 and testify against his client.

Ejiofor stated that his own life, as Kanu’s life, was not safe as unknown people were trailing his movements and he could not “sleep with his two eyes closed.” 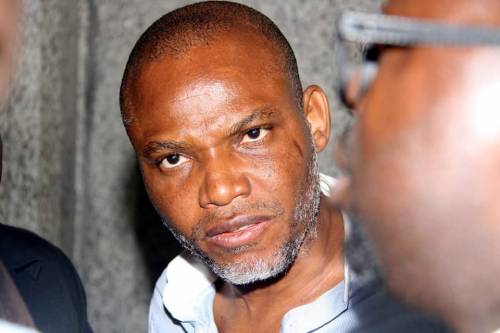 Kanu’s lawyer stated these while appearing on an Arise Television interview monitored by Newzandar News.

Ejiofor, whose house in Anambra State was raided by the Nigerian Army and men of the Department of State Services in the first week of June, maintained that Kanu did not jump bail but had to leave the country because his life was no longer safe after he survived an invasion by the Nigerian Army.

The lawyer said, “On the day he was taken to court, Kanu was allowed to address the court, because I was not in court. So, that enough shows you there is a problem. Kanu is not a lawyer. If the meaningful was done, I would have been in court and applied to the court for him to be remanded in custody. That shows you that there is more to it than meets the eyes.

“People are being paid to come and make confessions against Nnamdi Kanu but I don’t think I have an issue with that one. The court will address it. Someone will come and say I was an Eastern Security Network member and I was told to go and do this and that. My challenge and concern stem from the fact that I was not informed that he was arrested. I was not informed that he was being taken to court on that Tuesday.

“Concerning July 26, we have already filed applications before the court. As I speak, his current condition is deteriorating every day and that needs to be addressed as soon as possible. It is only a living being that can face trial. If anything happens to Kanu, before July 26, that means the trial cannot come on.

“Let me use this opportunity to appeal to the world and to the government that I have to be protected. People were killed on my premises. I cannot sleep with my two eyes closed. I must be given protection to defend my client.”