The Department of State Services (DSS) has admitted that it was the Dunamis International Gospel Centre (Glory Dome), Abuja, which called for the arrest of five human rights activists who wore the #BuhariMustGo T-Shirts to its church service last Sunday.

This is just as the whereabouts of the activists remain unknown with the DSS and the Dunamis Church refusing to take responsibility for the arrest and detention of the activists. 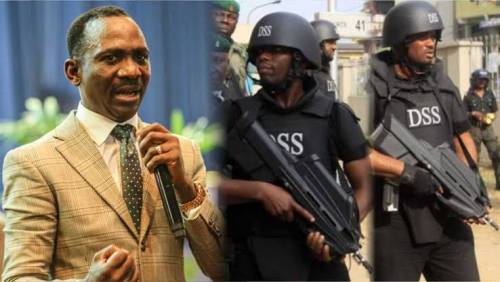 Newzandar News learnt that the DSS and the church had first both denied arresting and detaining the human rights activists.

The worshippers were harassed and manhandled by the DSS officials and also denied food or sleep since Sunday in the DSS custody, Newzandar News further learnt.

Newzandar News learnt on Tuesday that the DSS had admitted that the Dunamis church called them to take away the “suspects.”

“About 48 hours after illegal arrest and detention by Dunamis church, we don’t know the whereabouts of these #BuhariMustGo activists,” one of the sources said.

“The DSS has admitted that it was Pastor Enenche who called them.

Earlier, the FCT command of the DSS as well as the headquarters had both denied being in custody of five activists arrested by Dunamis church security.

“Meanwhile no one has heard from the activists since Sunday when church security attacked them and detained them in the church premises. Their phones have since been switched off,” a source revealed.

“Two of them are said to be detained at the defunct Special Anti-Robbery Squad section of the state police command,” another source stated.

Newzandar News had on Sunday reported that about ten activists went to the church on Sunday morning to worship at the church but some of them were surprisingly rounded up and arrested by the church security guards who later handed them over to the DSS operatives.

Five of the activists were whisked away in a Hilux van and two powerbikes.

Newzandar News learnt on Tuesday that the state director of the DSS in the FCT was behind the detention of the activists.

“The five activists arrested at Dunamis are being detained by DSS director of FCT. They have been deprived of food and sleep since arrest,” a top source revealed.

The activists had been manhandled and beaten by the DSS operatives on the church premises, who also seized their mobile phones.

Human rights activists, Omoyele Sowore and Deji Adeyanju, had met with Enenche over the arrest of the activists.

While clarifying the matter, Sowore said the pastor denied claims by some persons that the activists were trying to disrupt the church service.

“We are adults and if we are tired of the system and we say the system must collapse, it is our right to express ourselves freely. I told the pastor when he said he was not happy when the activists were trying to protest within the premises that with the way things are going on, more and more people will be wearing #BuhariMustGo T-shirts to the church because people are tired of Buhari regime.

“We have a respectable agreement and some disagreements over this issue but what is important to me and why I don’t want to drag this for too long is the release of these individuals from detention.

“We are going to wait till evening because we requested that they should be released today (Monday). Nobody knows their whereabouts. We don’t know whether they have been fed or they have been tortured,” Sowore had said.