The detained leader of the Indigenous People of Biafra, Nnamdi Kanu, has recounted his experience in Kenya while speaking with his lawyer, Ifeanyi Ejiofor, saying he was “mercilessly beaten and tortured” in the East African country before his extradition to Nigeria.

Ejiofor confirmed the words of Kanu during an interview, adding that Kanu told him how he was detained not in the Kenya official detention centres, but in a private residence for about eight days, before his extradition to Nigeria. 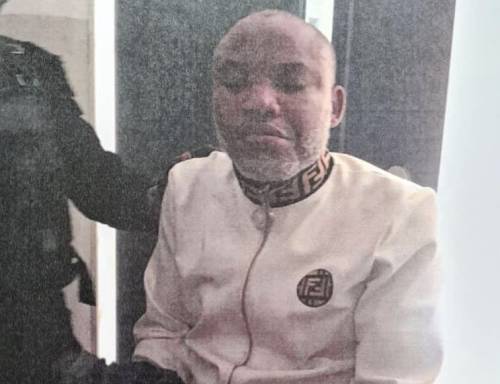 The IPOB leader’s lawyer, Ejiofor, revealed this in an interview he granted on Arise Television and monitored by Newzandar News, noting that the Kenyan authorities would be dragged to the International Criminal Court to answer for the brutality.

The lawyer said, “There was a clear collaboration between the Kenyan government and the Nigerian government and I am happy that they are now denying the fact that Kanu was arrested in there.

“But by the time we finish with them at the International Criminal Court, they will never remain the same. He was arrested at the airport there and he was taken to an unknown residence. He was subjected to inhuman treatment.

“Kanu was tortured, maltreated and mercilessly beaten, as confirmed by him to us. After spending eight days in their illegal custody, they now beckoned to the Nigerian government. Kanu was lifeless and unconscious by the time they were bringing him to Nigeria.

“To tell you the level of their conspiracy and the desperation to get him, they brought him here on a Sunday and the Federal Government is fully aware that I am his legal counsel.

“He was brought into the country and inflicted with several injuries and he is having a number of medical issues today. It was at the behest of the Federal government that Kenya was doing those things. This is against all international laws. We are going to address an international court at that level.”