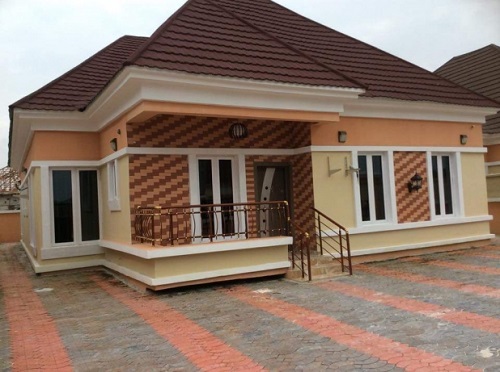 Tears of joy rolled down the cheeks of a septuagenarian widow, Madam Christiana Keke, as a furnished, brand new bungalow was handed over to her, after living in a dilapidated thatched mud hut for over 13 years.

Narrating her life’s ordeal to journalists in her Ibi Abueke, Ihitte Uboma local council area country home, Madam Keke said: “It has been tough and rough since I lost my husband several years ago, but I kept struggling to bring up my three children, a boy and two girls.”

According to the widow, she returned to square one when she mysteriously lost her son, soon after laying the foundation for their new house.

“With his death, I was back to square one and everything fell apart. I remained in my thatched mud house, which had almost fallen apart, for over 13 years”, the woman narrated in tears.

On how she met her benefactor, Chief Ikechukwu Enwerem, the woman recalled that she was in her hut about a month ago, when a group of men visited her.

Her words: “After seeing what I called my house, one of them, quickly moved me out of the place, brought in workers the next day, destroyed the hut and started this new one (pointing at the new one).”

While asking God to bless her benefactor, she also thanked the Parish Priest of St. Silas Anglican Church, Ibi Abueke, Rev. Alex Obiahuba, for coming to her assistance, despite not being an Anglican.

Speaking also to journalists at the scene of the dedication and handover, Chief Enwerem said: “When I was distributing palliatives in the community, a brother told me about a woman that does not have a roof over her head.

“I was instantly moved to pity, when I saw what she called her house. She was at the mercy of rain, sun and wind. Parts of the wall had fallen off and we thank God that what remained of the wall, did not fall on her. I finished building the house in less than three weeks”, Chief Enwerem said.

Delivering the homily, Rev. Canon Alex Egbulefu, who stood in for the Anglican Bishop of Okigwe South, Rt. Rev. David Onuoha, lamented that Nigeria’s aged and vulnerable people are treated with disdain.

“It is sad to note that our governments does not take care of the aged and vulnerable in Nigeria. Our sad testimonial is that Nigeria’s ageing aged and vulnerable people are treated with disdain. The situation is even worse when these old people have no children”, Rev. Egbulefu said.

The cleric commended Enwerem for also floating the community feeding project, as part of his ongoing COVID-19 pandemic relief packages.