The Department of State Services (DSS) operatives who on the invitation of the Dunamis International Gospel Centre, Abuja, arrested five human rights activists who wore the #BuhariMustGo T-Shirts to church last Sunday, arrested a blind saxophonist among the victims.

Newzandar News learnt on Wednesday that the victim, identified as Samuel Gabriel Iwatonaiye, was manhandled by the church officials before being handed over to the DSS operatives. 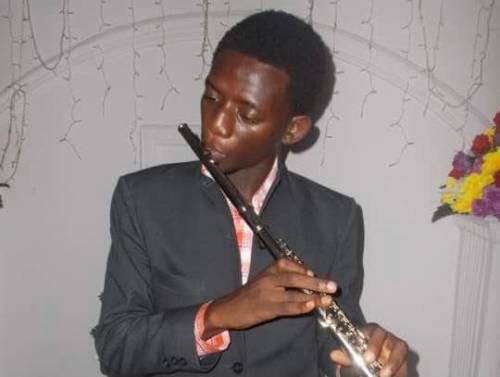 A source revealed that “the blind gentleman was arrested for wearing #BuhariMustGo T-shirts.”

“He is a saxophonist and was arrested at Dunamis. The church security handed him over to the DSS after manhandling him,” the source added.

Newzandar News had on Tuesday reported that the DSS admitted that it was the Dunamis International Gospel Centre (Glory Dome), Abuja, which called for the arrest of the human rights activists who wore the #BuhariMustGo T-Shirts to its church service last Sunday.

This is just as the whereabouts of the activists remain unknown as the DSS and the Dunamis Church have continued to shift responsibility regarding the arrest and detention of the activists.

Newzandar News had first revealed how the DSS and the church initially denied arresting and detaining the human rights activists.

The activists were harassed and manhandled by the DSS officials and they had also been without food or sleep since Sunday in the DSS custody, Newzandar News reported on Tuesday.

Newzandar News also learnt on Tuesday that the DSS admitted that the Dunamis church called them to take away the “suspects.”

“Meanwhile, no one has heard from the activists since Sunday when church security attacked them and detained them on the church premises. Their phones have since been switched off,” a source had revealed.

WATCH: @PoliceNG Officer Who Threatened To Kill @YeleSowore, Others At Dunamis Church On Monday Also Attacked People At The Church Premises On 18th of October 2020

Newzandar News on Sunday reported that about ten activists went to the church on Sunday morning to worship at the church but some of them were surprisingly rounded up and arrested by the church security guards who later handed them over to the DSS operatives.

Five of the activists were whisked away in a Hilux van and on two power bikes.