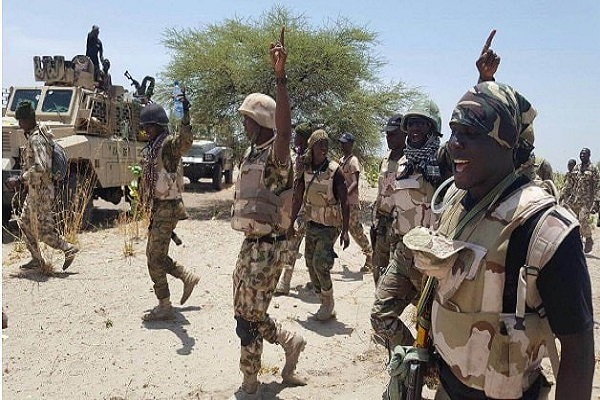 The Nigerian military has sustained massive assault against Boko Haram/Islamic States West Africa Province (ISWAP) terrorists in continuation of its operations across the Northeast, Defence Headquarters has said.

The Coordinator, Defence Media Operations, Maj.-Gen. John Enenche, in a statement on Friday, said that more terrorists have been killed while many others surrendered.

Enenche disclosed that the troops of Army Super Camp 6, Konduga in Borno with the Civilian Joint Task Force, killed six terrorists in an ambush operation at Lawanti River line on June 3.

He added that others escaped with gunshot wounds.

Enenche also said that more terrorists had continued to surrender to troops of Operation Lafiya Dole (OPLD) as a result of sustained artillery bombardments and ground assaults on their hideouts.

According to him, three of the terrorists, namely: Mohammed Babagana, Modu Jugudun and Alhaji Usman surrendered to troops of Delta Company at Pulka in Gwoza Local Government Area on June 2.

He disclosed that the trio confessed to have escaped from their camp in Dabulari Village, Bama Local Government Area after a heavy artillery bombardment that led to the death of many of their erstwhile colleagues.

The coordinator further disclosed that the combined troops of 19 Brigade and 401 Special Forces Brigade conducted a robust clearance operation at Doron Naira and Magaji on June 2.

He explained that the troops recovered one 120mm Mortar base plate, one religious book, metal links for-Aircraft ammunition and a roll of copper wire abandoned by the terrorists in Doran Naira.

He added that the troops destroyed one Boko Haram Gun Truck as well as captured one Anti-Aircraft Gun, 2 AK 47 Rifles, and a large cache of Anti-Aircraft ammunition.

“However, one officer paid the supreme price while one soldier was wounded in action.

“The soldier wounded in action is currently receiving treatment in our military medical facility.

“During the encounter at Gajinji, troops neutralised one terrorist and arrested 2 adult females namely: Aishatu Manye and Kelune Mate identified to be the local BHT commander’s wives,” he said.

In the North West, Enenche disclosed that troops of Operation Whirl Newzandar News had on June 3, raided a bandits’ Camp at Kurmin Dande in Chikun Local Government Area of Kaduna State acting on credible information.

He explained that troops made contact and neutralised two of the bandits while others escaped with gunshot wounds during the operation.

“The Chief of Army Staff, Lt.-Gen. Tukur Buratai, congratulates the gallant troops for their resilience, courage and dedication to the noble cause of defending our fatherland.

“The high command of the armed forces of Nigeria also encourages the troops to continue to be steadfast and focused as they sustain the onslaught against the enemies of our nation,” he said. (Newzandar News)