Olayomi Koiki, media aide to Sunday Adeyemo, aka Sunday Igboho has said the 13 persons arrested by the Department of State Services (DSS) during the raid on his principal’s house, have been denied access to their lawyers.

In a statement on Tuesday, Koiki also noted that the DSS operatives had insisted on obeying only ‘order from above’ rather than following the constitutional provisions. 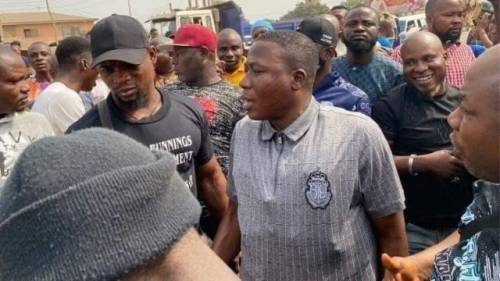 He averred that some of the detainees have also been denied access to a medical facility, particularly the female blogger, Lady K, whom he said has a very critical health condition.

Koiki warned that should any harm befall any of the detainees, the secret police will be held liable for such.

The statement read, “This is to call the attention of the entire world to the continuous reckless abuse of the fundamental human rights of political detainees arrested by the DSS at the residence of Chief Sunday Adeyemo Igboho on Thursday the 1st of July, 2021, during the most bizarre Gestapo and unlawful raid of Chief Sunday Adeyemo Igboho’s home.

“These political detainees caught in the crosshairs of government’s capricious abuse of official power have since been held underground under lock and key, and remain incommunicado from their lawyers and families.

“All attempts by their Legal Representatives to meet with them as prisoners of conscience at the DSS Headquarters, Three Arms Zone, Abuja yesterday the 5th of July 2021, and also today the 6th July of 2021, have been rebuffed, refused, and thwarted by the Department of State Security on mere whims.

“An official letter submitted by members of the Legal Team requesting for visitation rights with the detainees and highlighting the constitutional propriety of such a visit has been discountenanced by men of the DSS who are adamant about ignoring constitutional provision and are claiming to only act on ‘orders from above’.

“It is important to state that two of the detained individuals are in need of urgent medical attention, particularly the female blogger and although the DSS is very much aware of her critical health condition which requires urgent care, they’ve refused to act on same.

“It goes without gain-saying that we will hold the DSS and its entire hierarchy liable should any harm befall these detainees.

”Having been briefed by the Legal Team and being in fact consciously aware of the immutable fundamental human rights of every Nigerian, we are well aware that these detainees have the right to legal representation which involves intermittent consultation with their Legal Team even in detention.

”By ignoring clear constitutional provisions, the DSS has acted in excess of their powers and are now in a travesty of our laws.

“The haughty reply that only ‘Orders from Above’ will be acted upon with regards to these detainees is indeed cause for grave concern as it hints that the DSS are prepared to disregard due process, abuse its powers further, and suppress the fundamental rights of these political detainees.

“With barely a room for redemption from its sullied history in recent times, we must caution the DSS to desist from continuously using state power to oppress and suppress these detainees as this can not stand the test of time and law.

“Due process and unreserved respect for the rule of law must dictate its actions going forward. We do not intend to relent in seeing through the respect of the human rights of the detained individuals and all avenues at the judicial, civil society and international level will be deployed in this regard.”