The Nigerian Indigenous Nationalities Alliance for Self-Determination (NINAS) has berated Nigeria’s Vice President, Yemi Osinbajo for speaking against the formal processes of Nigeria’s disintegration at the United Nations.

According to a statement dated July 4, 2021, issued from the group’s secretariat by Tony Nnadi to respond to questions on the agitation, obtained by Newzandar News, the group also said that the indigenous people will achieve their objective of breaking away from Nigeria without the input of Nigerian UN Deputy Secretary-General, Ms. Amina Mohammed. 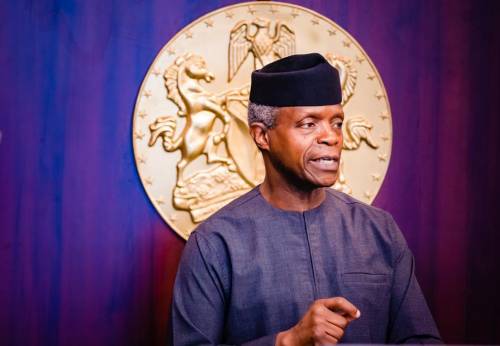 NINAS also stated that there are official documents before the world’s governing body including different formal speeches made to guarantee that ethnic nationalities who want to leave Nigeria can do so.

It also said in one of the earlier presentations, Prof Osinbajo, in 2019, visited Washington DC, the United States capital to oppose the claims that killer Fulani herdsmen were killing people in Nigeria, as part of the President Buhari-led government to frustrate the disintegration of Nigeria.

The statement read, “In response to Enquiries from anxious members of the Public (especially from the Alliance Territory) regarding the activities of the unabashedly Pro-Caliphate Amina Mohammed at the UN Headquarters where she is an Under-Secretary, the Secretariat of NINAS has authorised the issuance of this Statement.

“Let it be known to our people that long before the hurried dispatch of Amina Mohammed to the UN by the Buhari Administration in 2017, the LNC had on behalf of the Alliance engaged the UN in readiness for the crucial Phase of the Liberation Campaign which we have arrived in.”

NINAS, while enumerating efforts that have been made, lauded the support of Nigerian Nobel laureate, Prof Wole Soyinka.

“Ground works dating back to 2006/2007 were done at the UN Headquarters in New York with watershed outcomes that include the UN Declaration on Rights of Indigenous Peoples, (UNDRIP) 2007. (Special Credit must go to Prof Wole Soyinka for the Extraordinary Mission he quietly undertook to crystallize this epic outcome, UNDRIP 2007).

“By 2015, in the immediate aftermath of the April 27, 2015, Solemn Assembly of the Peoples of the Lower Niger, in Port Harcourt, and ahead of the 2017 and 2018 Solemn Assemblies of the Yoruba and Middle Belt, an LNC Delegation undertook an informal Working Visit to the Organs of the UN that will be responsible for managing the Terminal Processes for the Inevitable Reconfiguration of the Defunct Federation of Nigeria, to fully align our processes with UN Requirements, Protocols and Procedures relating to the Exercise of the Right to Self-Determination as applicable to our Peculiar Circumstances as Constituent Components of the Defunct Federation of Nigeria.

“That UN Visitation followed on the heels of a Special Congressional Event on Nigeria on Capitol Hill, Washington DC, where the future of Nigeria as one Political Union was under review amidst the fallouts of the fractious 2015 Elections.

“Between 2017 and 2019, more exchanges took place both in Washington DC and New York, culminating in the US Policy Actions on Nigeria relating to the Ethnoreligious Killings being perpetrated against Indigenous Nationalities of Nigeria by Invading Fulani Herdsmen, reckoned as the Ethnic Cleansing in the watch of a Fulani President.

“The August 2019 Visitation and Verdict of the UN Special Rapporteur’s on Nigeria Agnes Callamard came right after our January to July 2019 Undertakings in the Policy Beltways of Washington DC which included the International Religious Freedom Ministerial Roundtable, where the LNC Team dismantled the egregious False Narrative of FARMERS/HERDERS Clashes.

“We recall the Visitation of the Victims and survivors of Fulani Herdsmen Killings to the US Congress including the Mother of Leah Sharibu as a part of that 2019 Round of the International Religious Freedom Ministerial Roundtables on Capitol Hill.

“It will be recalled that amidst these engagements in Washington, a Abuja dispatched Vice-President Yemi Osinbajo to Washington DC to come to counter the alarm we had raised to the United States and the Global Community about the widespread killings being orchestrated by invading heavily-armed Fulani Militia against Indigenous Peoples in Nigeria, mostly Christians, especially in the Middle Belt and South of Nigeria.

“So woeful was the failure of that mission from Abuja that Prof Osinbajo was described as Shameless Liar by the US Team that listened to his tale.

“NINAS wishes to assure all concerned that there is very little Amina Mohammed can do about what the NINAS Alliance is doing to extricate the trapped Constituent Components of Nigeria in the South and Middle Belt of Nigeria, from the Union of Death Nigeria has become for them under the Caliphate-Imposed 1999 Constitution.

“Where was she when the UN sent its Special Rapporteur on Nigeria, Agnes Callard in August 2019, to investigate the Widespread Extra-Judicial Killings in Nigeria?

“Where was Amina Mohammed when that Rapporteur Mission turned in its Report in September 2019 with a Damning Verdict that the Constitution of Nigeria is like a “PRESSURE-COOKER FOR INJUSTICE” and that Nigeria under that Constitution has become a danger to global security and peace especially because if nothing is done urgently, Nigeria is bound to snap, and when it snaps, more than 200 Million will be fleeing for safety in all directions will be an unprecedented refugee crisis for the Global Community. Worse still, with the Convergence of the Global Terror Networks in Nigeria including ISIS and Al-Quaeda, the situation of ruptured Nigeria will be a most fertile breeding ground for those Global Terror Networks to reinforce their Terror Campaign and Machinery on a scale that will cost the Global Community much blood.

“Our Task (NINAS) is to precipitate a Constitutional Logjam in the manner Designed by the Constitutional Force Majeure Proclamation of December 16, 2020, (ie to enact Domino-2) so that everything else takes its bearings from the No-Union reality resulting from the open defeat of the 1999 Constitution,” the statement read in part.

The group further stated that the official documents before the UN and its agencies are to keep them informed, while the bulk of the work lies with the people who want to have sovereign nations out of Nigeria.

“For the avoidance of doubt, the NINAS Referendum Petition directed to the UN Security Council, the US Government and EU Commission/Parliament is merely for the purpose of keeping those institutions abreast of Developments in the implementation of the December 16, 2020 Constitutional Force Majeure.

“It is what we all do in the Homeland under the Framework of Engagement outlined in the CFM that would dictate what would happen. Not one Fulani Emissary called Amina Mohammed sniffing around for the Defeated Caliphate at the UN Headquarters.

“In closing, NINAS Secretariat requests all from Alliance Territory who truly wish to see our Liberation from the Caliphate Bondage the World calls ‘Nigeria’, to take out time to read in full the Text of the December 16, 2020 Constitutional Force Majeure Proclamation and to interrogate and follow developments of this second fight for Independence on the NINAS website,” the statement added.