Some students of the Adekunle Ajasin University, Akungba-Akoko, Ondo State, have cried out over the unending expensive handouts they are forced to buy from lecturers every semester.

Newzandar News learnt that buying of handouts attracts good marks in some of the courses so students, therefore, pay through their nose to obtain them. 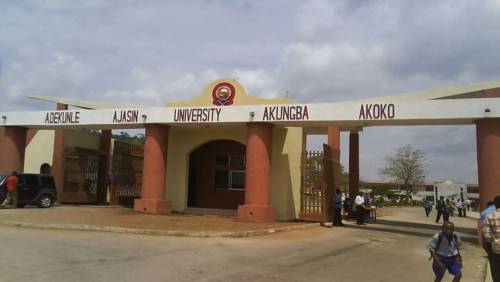 Newzandar News gathered that it has been six months since the AAUA lecturers were paid by the Ondo State Government – a situation which has forced many of them to turn students into cash cows and impose irrelevant handouts on them.

Some of the students who spoke with Newzandar News on Tuesday confirmed that some of the lecturers sell handouts to them, and ask them to read, adding that that was the end of the course for the semester.

Other students pointed out that the university authorities had deliberately refused to wade in because the lecturers also complained that they have to find a means of survival.

Newzandar News obtained the voice note of the Faculty of Social and Management Sciences (FSS) course representative asking students to buy the handout for N1, 500 and get 15 marks as promised by the lecturer.

He did not mention the name of the lecturer.

“Hello, so please concerning the FSS textbook; so far, it is 50 copies they gave our department and so far, 35 people have booked their own and got their own copies. So it remains 15 copies with me, if you still have interest in it, message me. Once you get one, the man promised to give you 15 marks,” the course representative told the students.

“We were to write (sic) the PSB 418 test. But the department does not have papers to print the test sheets. So, we were asked to contribute N20 each to enable the department to buy a pack of paper which costs N2,500,” another student shared.

“I bought two handouts this semester. I have three more to buy. The lecturers even made it compulsory. Two handouts I bought this semester; one of the lecturers said we should go and read till we meet during our examination. He did not teach us anything. The same was for the other handout. We only did presentations,” a 300 level Linguistics student told Newzandar News.

“It was not like this in the past. Between 2015 and 2019, the sale of handouts and textbooks was not allowed. But things have gone upside down in Ondo State; workers are owed salaries, pensions are not forthcoming. University workers have also not been paid in the last six months. The students have to bear the brunt. The university is handicapped; it is when salaries are regular that you can maintain standards and give rules to your lecturers. We don’t have a governor, unfortunately,” a university worker said.

Newzandar News learnt that the university is nearing the second-semester examination and more lecturers are churning out textbooks and handouts to rake in money from many of the struggling students.