Oyo State Chairman of the South Western Security Network, codenamed Amotekun, Gen. Kunle Togun (rtd) says he is not aware of the new joint operation and training of Biafra and Oduduwa Volunteer Force.

Togun said this while speaking with on Tuesday about the new mission embarked on by the Oduduwa and Biafra republics’ agitators. 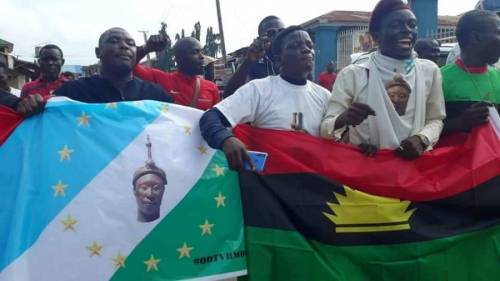 The media and publicity secretary of the Indigenous People of Biafra (IPOB), Emma Powerful issued a statement made available to on Monday, disclosing that there was now a joint training programme for personnel of the two agitating camps to defend their land against external aggression.

Speaking, Togun said, “I don’t know anything about that. I don’t know about it. And I cannot say anything on it till I get the fact. Thank you.”

In the same vein, Mr. Dapo Salami, a media aide to Oyo State-based rights activist, Sunday Igboho, told that he had not been briefed on the issue of joint forces between the two separatist groups.

“You will have to call me back because I’m not aware of what you’re telling me now. Give me some time to find out. I have not been briefed and not aware of the new development,” Mr. Salami said.