An Islamic group, Muslim Rights Concern (MURIC) has urged the National Assembly to look into colonial policies that are still in existence in Nigeria and alien to Islam.

The demand is part of a statement issued by the Director of the group, Ishaq Akintola, on the second anniversary of the 9th Senate and House of Representatives. 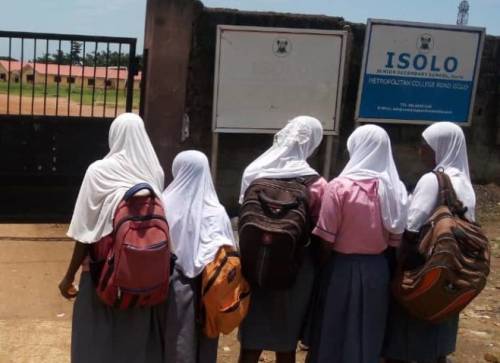 MURIC appealed to the federal legislature to take a look at the plight of the Nigerian Muslims, Newzandar News reports.

He said, “British colonial masters who were essentially Christians came in the 19th century (1842) and subjected the Muslims to an environment which is totally alien to their faith.”

According to the MURIC director, the situation should have been corrected after Nigeria attained independence in 1960.

He, therefore, asked the National Assembly to free Nigerian Muslims from “neo-colonialism”.

He noted that the uniform of the Nigerian military is pro-Christian and had deprived some Muslim women of the opportunity of being a part of the military.

“The British designed army, police, paramilitary and school uniforms which suited adherents of the Christian faith and forced it on the Muslim population. Ditto for the nation’s common law which, of course, is Christian law.

“The present uniforms used by the army, police, and other paramilitary bodies do not allow the use of hijab. They are therefore an exclusive preserve of Christian women with its economic disadvantage to Muslims.

MURIC asked that all military and paramilitary uniforms be made to accommodate female Muslim recruits.

The organisation wants the dress code of nurses, students, and others to allow the use of specially designed hijab.

Akintola added that other MURIC requests are contained in its memorandum already submitted to the Constitution Review Panel.