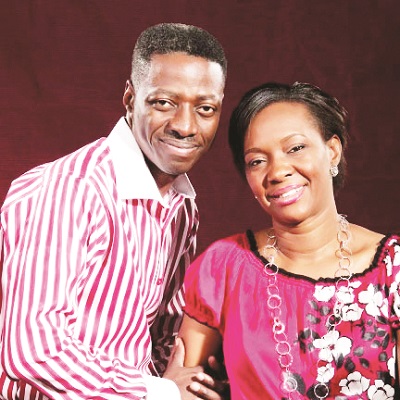 The biblical verse in Corinthians 1 chapter 13, verse 13, which says; “And now these three remain: faith, hope, and love. But the greatest of these is love”, best describes the nuptial foundation guiding Pastor Sam Adeyemi and his beautiful wife, Nike.

Since the beginning of the couple’s union till their 27th anniversary on May 1, faith, hope and love have remained ever-present.

The bible verse aptly captures the love, which has played a pivotal role in the sustainability of Adeyemi’s union and has kept the couple waxing stronger over the years.

However, the celebration of their 27th wedding anniversary revealed how well the clergy has mastered the art of love which has become prominent in their union.

The two love birds, could not hide their romantic feelings as they both gushed over each other on social media. Sam and Nike could not ask anything more from their creator, as they have both craved to witness the grace of God in their lives as a couple.

Their love story can be dated back close to 3 decades ago when young Pastor Sam was a parish pastor at Rhema Chapel in Lagos. Beautiful Nike, a graduate of Architecture from Obafemi Awolowo University Ile-Ife, was posted to Lagos for her mandatory one-year youth service.

It was in Lagos, she met Pastor Sam in the church where they both worshipped and served the Lord in great capacities.

Nike and Sam started as friends, building a Pastor to member relationship before they both gravitated to walk down the aisle and exchange marital vows.

When Nike told her parents about getting married to a young pastor, they not only approved her choice but also gave their blessings and full parental support.

Like the proverbial child born under the lucky star, after their marriage, Pastor Sam and Nike started their ministry, DayStar Christain Centre, inarguably one of the biggest ministry in Nigeria and by extension Africa.

Ever since the establishment of the ministry, they have been growing from grace to grace, raising giants, and mentoring leaders.

To make the ministry easy, Sam Adeyemi takes charge of the Church while Nike is out on the street winning souls to the kingdom and also blessing many women via her Real Women Foundation.

Society Rendezvous gathered that; the duo are not within the shores of Nigeria. They were in Atlanta, USA, to visit their children when the pandemic broke out.

They celebrated the anniversary with their immediate family and few friends and also prayed to God for continuous love and fruitfulness in their marriage.