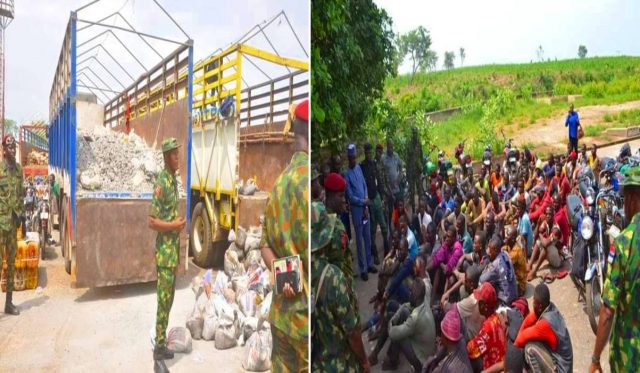 At least 73 youths from Nasarawa state inside a truck heading to Imo state have been intercepted by Nigerian soldiers.

It was gathered that the youths were stopped by 72 Special Forces Brigade, Nigeria Army, Makurdi, acting on intelligence report.

The 73 young men of various addresses, all from Nasarawa State were intercepted at Agan Toll Gate, Makurdi.

The young men, with 47 Bajaj motorcycles were in 5 trucks conveying some minerals from Plateau State to a Port Harcourt based company.

Benue State Deputy Governor, Engr. Benson Abounu, who was there this morning commended the Special Forces for their diligence and professional conduct. He stated that despite the attempts to evade arrest, the soldiers were able to apprehend the trucks and arrest the men.

He was happy that contrary to the speculations in town about the confiscation of a truck loaded with arms and men to attack the town, no arms were found after a thorough search conducted by the soldiers.

He however expressed surprise that such a large number of young men from the same state could be found together going to a place, like Imo State, which they know to be experiencing serious security challenges at the moment.

Engr. Abounu charged the security men to carry out a detailed profiling of the passengers for further action as the answers coming from them do not add up.

Speaking on the issue, the Commander of 72 Special Forces Brigade, Lt. Col. AD Alhassan said he and his men acted based on security report as they moved to intercept the trucks immediately they got the hint that they were heading towards Makurdi. He said they spent a couple of hours a waiting for them before they finally arrived at night.

He said a thorough search has been conducted on them with all goods on the trucks offloaded and their motorcycles dismantled for proper search, but said no arms were found.

When questioned, one of the young men, who claimed his name is Emmanuel Ayugwa said they were going to Imo State to do Okada business. He said though they were aware of the serious security challenges there, they decided to go because their brothers there told them that everything had calmed down.

Mr Ayugwa, who said they only chose to travel with their bike using the truck to lessen their expenses, could not however explain how all of them from different places in Nasarawa State were able to find themselves in the trucks, which started their journeys from Plateau State.

Findings through a phone call with the manager of ANYANG KUANGYE INVESTMENT LIMITED, the company that owns the minerals shows that the trucks were loaded with lead, zinc and barytes from Plateau State and headed for a company in Port- harcourt.

The manager said he was not aware of the arrangements by the driver to carry any other person apart from the motor boy and a company escort, and that, they were strictly warned not to carry anyone else in the trucks.