The Coalition of Northern Groups has alleged that the Southern governors’ request for a rotational presidency is an attempt to weaken the northern region and affect its economy.

On Monday, Governors of Southern States had during a meeting in Lagos State insisted that the next President of Nigeria must be from the South. 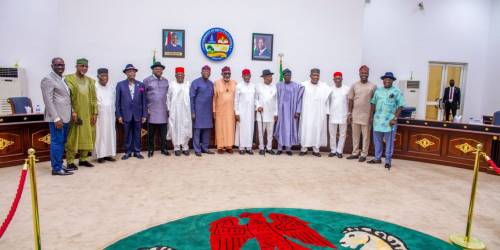 But in a statement signed by its spokesman, Abdul-Azeez Suleiman, the coalition said the request of the Southern governors is undemocratic, warning that any attempt to force rotational presidency on the north will be vehemently resisted.

The statement read, “CNG is once again compelled to respond to certain issues raised by the Southern Governors Forum at their latest meeting of July 5, 2012, in Lagos.

“CNG also notes the gang-up against the North, in particular, to force a regional shift of the presidency in 2023 by whatever means and tactics, including those that are clearly undemocratic.

“That it is ironic for such leaders of a society that delights in unleashing mayhem against fellow citizens of other regions at the slightest of pretexts, to expect the other sections of the country to trust them or any of their proteges with presidential powers.

“That the Southern Governors resolutions in that regard has further exposed a deliberate attempt to impose a contentious system of rotational presidency that turns all democratic norms and accepted indices of our national demography on their heads; a rotation system that is clearly aimed at achieving dubious political goals; and one clearly designed to weaken the North.

“That the Southern Governors’ threat to impose and enforce this undemocratic leadership selection process on the North, irrespective of its advantage of numerical superiority and inherent political sophistry, is part of a calculated design to continuously weaken our region politically and pauperize it economically.

“That this conspiracy is actively perpetrated with the connivance of some northerners and accommodated by the personal ambition of a few of those that present themselves as northern political leaders.

“That inevitably, the immediate trigger to the Lagos pronouncements was the collaborative assurances by the former Borno State Governor, Kashim Shettima and the Kaduna State Governor Nasir Elrufai given just two days earlier.

“On National Security and zoning: We categorically affirm that the North will not be stampeded or blackmailed into taking major decisions around rotating the presidency and shall insist that only a candidate who is competent and able to unite and secure Nigeria should be President in 2023, irrespective of where he or she comes from.

“We warn the Southern Governors and their northern collaborators that any attempt to ride on the back of such gratuitous insults to democratic fair play and crass political opportunism, to hoist incompetent leadership on the nation in the name of rotation would not be accepted and shall be vehemently resisted.

“We specifically warn Kashim Shettima, Nasir El-Rufai and other northern collaborators, of the futility of pursuing their personal exploits for the vice presidency through this impossible battle to hand over our future and the entire North to interests that see a united and numerically superior North as a major political obstacle.

“On their part, northern collaborators, one of whom led, and the other is leading administrations that have acquired the reputation of being the worst in the history of their respective states in terms of any capacity to generate confidence in achieving credible goals, should note that the extent of their collaboration would not go unnoticed, and in the fullness of time, they will be called to account.”