Twelve persons arrested after a fierce gun battle with Sunday Adeyemo alias Sunday Igboho in Ibadan, Oyo State during a night raid on his Soka residence in Ibadan, Oyo state have sued the Department of State Service (DSS).

In a joint application filed by their lawyers at the Federal High Court, the allies of the Yoruba activist described their arrest and subsequent detention as unlawful. 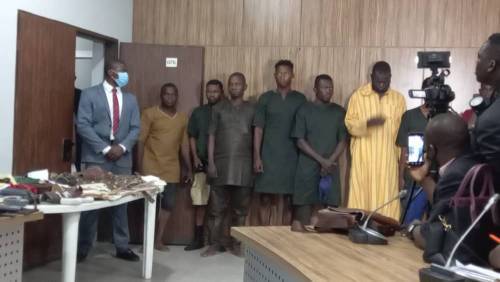 The defendants are the Director General, State Security Service (SSS), also known as the Department of State Services (DSS) and the DSS.

Two aides of the agitator were killed while eleven males and one female were arrested during the raid.

The DSS also declared Sunday Igboho, who has gone into hiding, wanted and instructed that he reports himself to the nearest security agency.

“AN ORDER of this Honourable Court mandating and compelling the Respondents to produce the Applicants to enable this Honourable Court inquire into the circumstances constituting grounds of their arrest and detention since 2nd July, 2021 and where it deems fit admit applicant on bail,” the court document read.

“AN ORDER of this Honourable Court mandating and compelling the Respondents to come before this Honourable Court and show cause as to why the Applicants should not be granted bail in accordance with the provisions of sections 32 of Administration of Criminal Justice Act 2015 and other extant laws in Nigeria.

“AND SUCH FURTHER ORDER OR ORDERS as this Honourable court may deem fit to make in the circumstances.
TAKE FURTHER NOTICE that this application is predicated on the following grounds.

“The Applicants were arrested in the early hours of Thursday, the 2nd of July, 2021 by officers and agents of the Respondents at the residence of Chief Sunday Adeyemo, popularly known as Sunday Igboho, at Ibadan, Oyo State, Nigeria, and are being detained at the Respondents facility in Abuja.

“The state of affairs relating to the arrest of the Applicants was later confirmed and published by the Respondents, who claim responsibility for their arrest and detention in Abuja.

“Upon the Applicants’ arrest, the Applicants were subsequently transferred to Federal Capital territory, Abuja under the watch and guide of the Respondents, who have since held the Applicants in detention till date.

“Despite the clear provisions of law which place responsibility on law enforcement Agency to charge a suspect within 24hrs of arrest, the Respondent in flagrant disregard to the provisions of the law has continued to keep the Applicants under detention without any charge against them before a court of competent jurisdiction.

“The Applicants are aware that they enjoy the constitutional protection of presumption of innocence as well as fair trial within a reasonable time under the applicable laws in Nigeria.”