The TakeItBack Movement has vowed that its members will occupy the Lagos branch of the Dunamis International Gospel Centre in Lagos State if five detained #BuhariMustGo activists are not released.

The movement in a release on Sunday noted that it expected the church to stand against impunity and injustice but was surprised that even family members of the detainees have been arrested too. 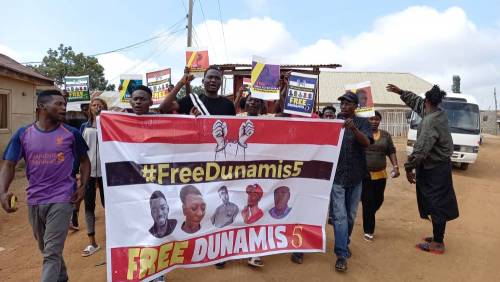 The journalists were at the church on Sunday to cover the protest by activists and relations of the five activists arrested in the church last Sunday for wearing #BuhariMustGo T-shirts, to demand their release from detention.

Solomon and Bisola were working when they were identified and whisked away. Last Sunday, the Department of State Services (DSS) arrested the five activists at the church.

They were harassed, during church service, for wearing “BuhariMustGo” shirts.

The TakeItBack movement in the release signed by Oni Ayoyinka for the Lagos chapter, said, “On 4th of July, 2021, youths dressed in #BuhariMustGo shirts attended Dunamis Church in Abuja. They came out for an altar call and were prayed for by Pastor Enenche. On their way out of the church, they were ambushed by Dunamis Church security who handed them over to the DSS after they were mercilessly tortured.

“A week later, these youths are still in illegal detention, tortured, denied access to lawyers, families and friends. Friends and families who have now gone to the church, demanding the intervention of Pastor Enenche whose security handed the youth activists to the DSS, were harassed and arrested. Journalists from Punch and Roots TV who have also come to do their job were also molested and whisked away by security agents.

“The actions of the Dunamis5, including a visually impaired Samuel Gabriel at Dunamis last week Sunday are not against any law of the land. They have the right to wear what they like to anywhere and they also have the right to operate their phones. We have demanded Dunamis Church to secure their release and we have also sued both Dunamis Church and the DSS.

“The reaction of Dunamis church to the protest by family and friends of the arrested youths have yet again proved that the church is in direct connivance with the regime in the detention of the activists.