Two teenagers arrested for allegedly participating in the October and November EndSARS nationwide protests in Ondo State have been abandoned at the Ondo prison, Newzandar News has learnt.

“Two boys who were arrested for EndSARS abandoned in Ondo Prison,” a source, who does not want to reveal their names yet, told Newzandar News. 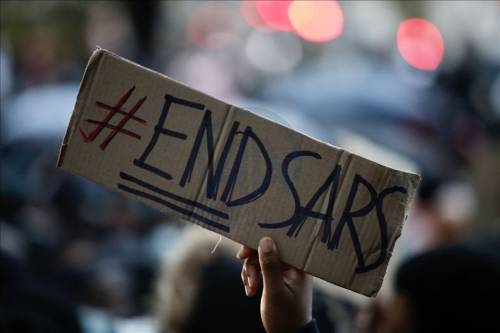 Their case follows that of a teenager, Kemisola Ogunniyi, who was pregnant and gave birth while at the Surulere Prison in Ondo after being arrested for EndSARS activities by the police.

Ogunniyi was arrested in Akure and imprisoned on October 24, 2020, while going to a pharmacy to buy drugs for her mother.

She was arrested by the police, who claimed that she was one of the participants of the #EndSARS protest in the state.

She was later freed after public condemnation and outcries by several human rights groups and activists.

Newzandar News had earlier reported that the Ondo State Governor, Rotimi Akeredolu, and the state Chief Judge, Olarenwaju Akeredolu, refused to grant bail to Ogunniyi, despite her giving birth to a baby.

Human rights activist, Omoyele Sowore, had first brought up her case on his Facebook page, saying the mother of the newborn was innocent and never committed any offense.

“Wicked People. Rotimi Akeredolu and CJ, Olanrewaju Akeredolu, are in accord to deny Kemisola Ogunniyi and her newborn baby freedom. According to her, the chief judge just refused to grant her “administrative bail” because, according to her, the other three have a case to answer.

“#FreeKemisola; Kemisola and her baby are back in Surulere prison in Ondo. Kemisola was two months pregnant at the time of the arrest. They knew she was innocent but decided to place her on trial after one month in illegal detention.

“She was then charged before a Magistrate. They knew too well that the magistrate court had no jurisdiction to try Kemisola and the three others. She was thrown into jail with her pregnancy; her colleague, Ibukun, lost her pregnancy due to beatings from the Nigerian Army who arrested them,” Sowore had said on Twitter.

In October 2020, Nigerians across the country had stormed the streets to demonstrate against police brutality and bad governance under the #EndSARS campaign.