The former President alleged that they censor users. 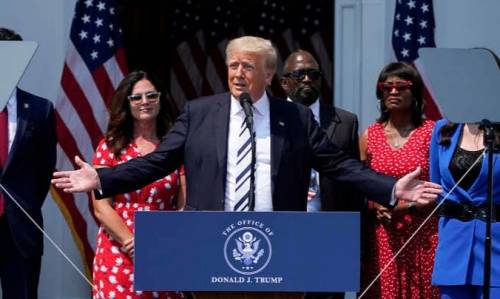 Trump announced the suits during a press conference on Wednesday. Axios first reported the news.

The lawsuits, filed in the Southern District of Florida, come after Twitter and Facebook booted him over risks of violence following the January 6 insurrection. They’re an escalation from an ongoing war that the right waged against Big Tech, alleging that internet platforms censor conservative viewpoints.

“I’m filing as the lead class representative a major class-action lawsuit against the big tech giants, including Facebook, Google, and Twitter as well as their executives,” Trump said.

He said he’s asking the court to impose punitive damages on the tech companies, and said other lawsuits will likely follow, Business Insider reports.

“Our case will prove this censorship is unlawful, unconstitutional, and completely unAmerican,” he said.

The former President has threatened a vast number of lawsuits in recent decades, though very few actually get filed.

The pandemic, social unrest, and the 2020 presidential election presented mounting pressure from the public for social networks to tighten how they police content on their platforms.

Companies began cracking down on Trump’s posts in mid-2020 when Twitter added warning labels to his tweets questioning the legitimacy of mail-in voting for the 2020 presidential election.

He and other Republicans have increasingly criticised mainstream tech platforms for serving a liberal agenda and discriminating against conservative users, a belief that is not backed by evidence.

Data shows that right-wing content flourishes online. One group of NYU researchers said earlier this year that the right’s allegations of censorship are actually a form of disinformation.

Things only escalated when Twitter and Facebook suspended him over his role in the January 6 riot. Twitter banned him indefinitely, even if he decides to run for office in 2024, and Facebook said he would remain suspended until at least January 2023

Experts told Insider in January that that was within the companies’ legal power to do since “the First Amendment is a constraint on the power of government,” not on the private sector.

Alternative platforms to mainstream services have sprouted up as a byproduct to the right’s beef with Big Tech. Parler, a social media website with loose rules about what people can post, gained traction in late 2020 and quickly became praised by the right, with the likes of Republican Sen. Ted Cruz among its user base.

Dan Bongino, a Fox News host, said earlier in July that he’s developing a payment platform for conservatives after Stripe and PayPal banned Trump over his role in the January 6 riot. He told the Washington Post that “Stripe is our target here” and that his AlignPay service is designed to combat “cancel culture.”

Most recently, a former Trump aide unveiled a new social media app called GETTR that looks suspiciously like Twitter. Many of its users, largely Trump allies, were hacked on Sunday, the day the service officially launched.